Spread can have different definitions, but in general is the difference between bid and ask price of a security or asset, rates or yields. In the future exchange, spread is traditionally denoted in pips, a percentage in point, meaning fourth decimal place in currency quotation. It represents brokerage service costs and replaces transactions fees. Spread can also refer to the difference in a trading position, short position (that is, selling) in one futures contract or currency and a long position (that is, buying) in another. This is officially known as a spread trade. In banking, the spread is an interest rate that is applied by banks in credit agreements and that can be understood as the bank’s profit margin, which is the difference between the discount interest rates charged to banks by the Central Bank and the premium rate charged to the consumer.
Because most of our audience is more interested in Forex trading, we will focus on the future spread or how important is the spread when making investment decisions in a currency pair?

Rule of thumb, the higher are the market participants (high trading volume), the lower the spread (difference between ask and bid price); hence, the higher is the liquidity for the financial instrument traded in the market. So, one can say the lower the spread on a pair of currencies, the higher is its liquidity, resulting in lower price volatility, and therefore less investment risk. In order to make sure this statement is true for any pair of currencies, we selected the most popular currency pair traded on the foreign exchange market (Forex).
EUR/USD is the most popular currency pair on the market, making up 23.1% of daily Forex trade volume. The EUR/USD pair is the most popular because it is representative of the world’s two biggest economies: the European single market and the US.
The high daily volume of EUR/USD transactions gives a lot of liquidity, generating tight spreads. Liquidity and tight spreads are important for traders because they mean that large trades can be made with little impact on the market. The exchange rate of EUR/USD is determined by a number of factors, not least of which the interest rates are set by the European Central Bank (ECB) and the US Federal Reserve (Fed). This is because the currency with the higher interest rates will attract more investors, and therefore, increasing the demand for the currency offering the higher real interest rate, giving a better return on their initial investment. On the other hand, if for instance, the ECB had set higher interest rates than the Fed, it is likely that the euro would appreciate relative to the dollar.
The following figure shows from the lowest to the highest currency pair spreads: 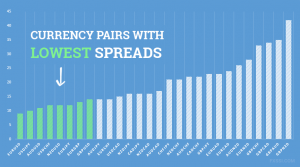 In Forex trading the following types of spreads are used:
Fixed spread – Fixed spreads allow traders to know their bottom line costs on each trade, regardless of market conditions. In sum, it does not matter what is the market volatility or liquidity that the market’s spread remains the same size.
Variable spread – May also be called floating spread because is constantly changing value between the ask and bid prices. When you buying or selling a currency pair fluctuates because of the dynamic change in the bid and ask size (Demand/Supply), entering the market and total trading activity. Generally variable spread is low during times of market inactivity (approximately 1-2 pips), but during volatile market can actually widen to as much as 40-50 pips.
What Influences the Spread in Forex Trading?
Even though, there are many variables that may influence the spread, liquidity is the most important. Hence, the most popular currency pairs (high volume trading), are traded with lowest spreads, while less popular ones (low volume trading) raise dozen pips spread. The amount of the deal is also important as middle size spot deals quotes are listed and executed with standard tight spreads, and extreme deals, no matter if they are too small or big are quoted with broader spreads because of the risk that involves. Therefore, there is a high correlation between uncertainty (risk) and spreads. When the market is volatile the spread between bid and ask price gets wider. On the other hand, traders with high trading volume transactions may impact spreads, once premium clients usually get a dealer discount. Because the Forex market is the most competitive market, dealers and brokers tend to fix spreads on the lowest possible cost.
Spreads allow traders to take a close control on the trading expenses, currency pair risk, and liquidity. Return on Investment best performance can only be achieved when all these variables are carefully analyzed and maximum quantity of market conditions is taken into account. Successful trading is highly correlated with market indicators evaluation, forecasting, risk versus return in investment and transaction cost analysis. However, spreads are subject to change; therefore spread management strategy must be flexible to quickly adjust to market movement.