How to Trade the Head and Shoulders Pattern in Forex? 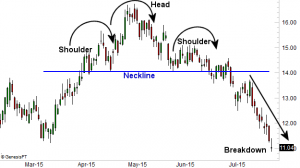 The Head and Shoulders Pattern is one of the favorite technical analysis patterns for traders because it offers a good opportunity to maximize profits. However, it is imperative for traders to detect the next trade opportunity. Hence, understanding, spotting, and correctly identifying entry and exit prices is crucial to successful trading. The head and shoulders pattern is valuable because of its longstanding history of reliability among market analysts.

The Basics of the Head and Shoulders Pattern
The head and shoulders predict a chart pattern formation, which usually indicates a reversal in trend, making a shift from bullish to bearish, or vice-versa. This pattern has been considerable reliable on predicting trend reversal. Head and shoulders patterns are rarely perfect, meaning there is almost always small price fluctuations in between the head and the shoulders, making it rarely perfectly shaped in its appearance.

The picture here is a clear representation of the three parts of this pattern: two shoulder areas and a head area that price moves through in creating the pattern signaling a market reversal. The first “shoulder” forms after a significant bullish period in the market when price rises and then declines into a trough. The “head” is then formed when price increases again, creating a high peak above the level of the first shoulder formation. From this point, price falls and creates the second shoulder, which is usually similar in appearance to the first shoulder. Importantly, the initial decline does not carry significantly below the level of the first shoulder before there is usually either a slight retracement upward or a flattening out of price movement.
The pattern is completed, giving a market reversal signal, when price declines again, breaking below the neckline. The neckline, as depicted above, is the horizontal line that connects the first two troughs to one another.

Setting Price Target
From the figure above, first, let’s take a look at the Neckline. Secondly, once the Neckline is broken, the EUR/USD is expected to decline by the same amount as the change in price from the Neck line to the top of the head.

Please note, Volume is a very important indicator in a Head and Shoulder pattern because stronger volume usually indicates higher rises and declines on the Head and Shoulders reverse patterns. 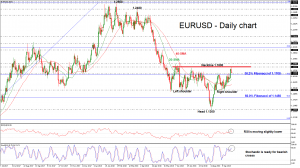 Head and shoulders patterns can also form in the opposite direction, which signals a market reversal and trend change from bearish to bullish. We call it an inverse head and shoulders pattern, which is equivalent to a Head and Shoulders pattern discussed earlier, but it is upside down. In sum, it signals that the market is changing from a downward into an upward trend.
In the inverse head and shoulders pattern, stock prices will drop into three lows that are separated by two temporary periods of price rallying. The middle trough, which would be the head of the inverse pattern, is the lowest, while the shoulders are somewhat less deep. Once the second shoulder has formed, prices will make a final rally, breaking above the neckline and indicating the bearish trend has reversed and that bulls are likely taking control of the market.

Before making any trades, it’s important to let a head and shoulders pattern complete itself. If the pattern seems to be forming, or is in the middle of forming, you should not assume that it will fully develop and make trades based on what you believe is going to happen. The market can be fickle and changes at the drop of a hat, so remember to watch trends as they develop, be patient, and try to avoid getting caught over-anticipating.
Plan your trades ahead of time so you’ll be ready to move forward, once the neckline is broken. Watch for variables that might make it necessary to change your entries, stops, and profit targets.
Until next article, wealthy trading.