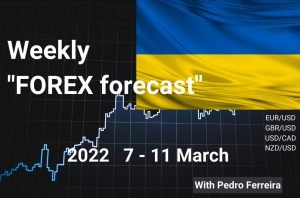 The EURUSD pair remains under selling pressure, trading near the multi-month low posted this week at 1.1056. Markets are cautious, as the war in Eastern Europe sees no end, while its consequences are disrupting global economies. Commodities prices keep skyrocketing, with crude oil and gas prices at multi-year highs. Russian stocks’ market remains closed, but shares of EU companies with a Russian exposure plunged.

Meanwhile, the country is at the brink of default amid the global sanctions. Nevertheless, attacks on Ukraine continue, and Russian President Vladimir Putin told his French counterpart Emmanuel Macron that the goals of Russia’s operation in Ukraine would be achieved in any case.

Earlier in the day, the European Central Bank released the accounts of its latest meeting, which showed that members believed a scaling-back of monetary accommodation should commence, adding that members believe that inflation was likely to continue higher than predicted for longer. Additionally, policymakers noted that the greatest risk was no longer tightening monetary policy too soon but too late.

Data wise, Markit released the final readings of its February Services and Composite PMIs, most of which were downwardly revised in the EU. The Union also published the January Producer Price Index, which jumped to 30.6% YoY, reflecting persistent inflationary pressures.

In the US, Initial Jobless Claims for the week ended February 25 resulted better than expected, at 215K. The country is yet to release the February official ISM Services PMI, foreseen at 61, while US Federal Reserve chief Jerome Powell will testify for a second consecutive day.

EURUSD extends is slide below 1.1050, undermined by risk-aversion. Wall Street dips in the red amid Eastern Europe war, tepid US data. The US ISM Services PMI contracted to 56.5 in February.

The EURUSD pair trades in the 1.1070 price zone and still looks bearish in its daily chart. It keeps developing far below its moving averages, which head firmly lower, reflecting prevalent selling interest. The Momentum indicator lost its bearish strength and consolidates near oversold readings, while the RSI indicator keeps heading south at around 32.

The 4-hour chart shows that the pair remains below a firmly bearish 20 SMA, while technical indicators head lower within negative levels, lacking strength but still skewing the risk to the downside. The pair will likely pierce the 1.1000 threshold on a break below 1.1055, the immediate support level.

For next week, we are looking at a possible retracement on EURUSD. For the very short-term, I believe EURUSD price has formed a bottom, and we may see a move up to 1,1230, where we could again look for selling opportunities. For those of you who are trading against the trend, then I would say that this is a great opportunity for long positions with small stops, and to move your stops to breakeven; once, you see price breaking above 1.1150, while watching out for possible end of the upside move. As illustrated in the following chart, our technical analysis is suggesting to go short at or above 1.1100, setting a Stop loss at 1.1200, and to go Long at or below 1.1052, setting a Stop loss at 1.0952. 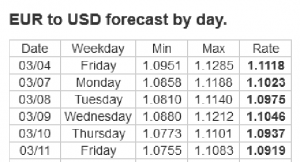