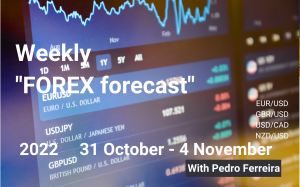 EURUSD has gone into a consolidation phase early Thursday after having reached its highest level since mid-September at around 1.0100 during the Asian trading hours. In case the European Central Bank (ECB) delivers a hawkish surprise later in the day, the pair could gather enough bullish momentum to extend its recovery.

On Wednesday, the broad-based selling pressure surrounding the greenback fueled EURUSD’s rally. The Bank of Canada’s dovish 50 basis points rate hike caused global bond yields to push lower and the dollar suffered heavy losses against its major rivals with the US Dollar Index losing 1% for the second straight day.

The ECB is widely expected to hike its key rates by 75 basis points following the October policy meeting. Rather than the rate decision, the ECB’s language should impact the shared currency’s valuation.

In case the bank communicates policymakers’ willingness to stick to an aggressive tightening stance with another super-sized rate increase in December, EURUSD is likely to gain traction.

On the other hand, the euro could have a hard time finding demand in case the policy statement reveals that some policymakers leaned toward a 50 bps rate hike in October or that they didn’t anticipate another big rate increase before the end of the year.

Although inflation in the euro continues to run uncomfortably hot, renewed concerns over a severe recession put the ECB between a rock and a hard place.

In the meantime, the US Bureau of Economic Analysis will release its first estimate of the third-quarter Gross Domestic Product (GDP) growth.

The market expectation points to a 2.4% annualized expansion following the 0.6% contraction recorded in the second quarter. Since the beginning of the week, markets observed a dollar selloff whenever there was a disappointing data release.

Hence, a similar, straightforward, reaction could be expected with a weaker-than-expected GDP print weighing on the USD and vice versa.

It is worth noting that the pair could fluctuate wildly with investors assessing the ECB language and the implications of the US data on the Fed’s rate outlook.

EURUSD is trading close to.1.0050, retreating from near 1.0100 in early European trading. Investors resort to profit-taking ahead of the critical ECB rate hike decision and the US advance Q3 GDP release.

On the downside, 1.0050 (static level, former resistance) aligns as initial support before the all-important 1.0000 level. In case a dovish ECB message triggers a euro selloff, a drop below parity could bring in additional sellers and cause the pair to slide toward 0.9950 (static level, 20-period SMA).

Key resistance seems to have formed at 1.0100 (static level, psychological level). If the pair rises above that level and confirms it as support, it could target 1.0175 (static level) and 1.0200 (September high).

Meanwhile, the Relative Strength Index (RSI) indicator on the four-hour chart stays slightly above 70, suggesting that there is more room on the downside for the pair to correct its overbought conditions.

For next week, as illustrated in the following 4-hour chart, we have a rare beautiful bearish Gartley pattern, which could complete near a strong resistance level , where the market moved lower by more than 6% or 660 pips. There are two ways to approach this pattern:
First way: limit order at D completing level
Second way: wait for a further push to the upside near the structure resistance zone, wait for confirmation and then execute a short position on the currency pair. 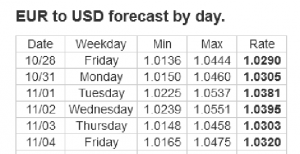 Multi Account Manager for MT4
Menu
KeySoft Group uses cookies on this website. With your consent we will use them to measure and analyze usage of the website, to tailor it to your interests, and to present you relevant advertising and information. For more information please read our Cookie Statement | Customize my cookie preferences.
Accept All