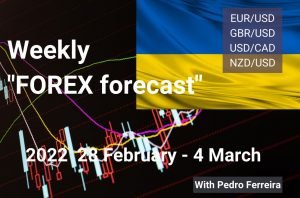 The EURUSD pair plummeted to 1.1153, its lowest since late January when the pair set a multi-month low of 1.1120. Panic reached financial boards after Russia started the military assault on Ukraine. So far, roughly 70 deaths have been reported as Moscow attacked multiple military targets in its neighbor country.

Ukrainian President Volodymyr Zelenskyy imposed martial law across all of Ukraine and severed all diplomatic relations with Russia. Meanwhile, NATO Secretary General Jens Stoltenberg said that Russia is using force to try to rewrite history, adding that the organism “will deploy capabilities and forces including NATO Response Force.”

The American dollar resumed its advance heading into the US opening, and EUR/USD trades a handful of pips above the mentioned low. Market players are ignoring macroeconomic figures, although US data surely help the greenback. The Q4 Gross Domestic Product was upwardly revised to 7% QoQ as expected, while Initial Jobless Claims for the week ended February 18 fell to 232K, better than anticipated.

The markets will likely continue to trade accordingly to the risk-off mood, and another run to safety could be expected with the US opening, as Wall Street indexes are poised to open at multi-week lows.

EURUSD extends slide, trades around below 1.1150, remaining under constant bearish pressure as safe-haven flows continue to boost the greenback. The pair accelerates its slump as Wall Street opens with sharp losses. Investors eye the latest geopolitical developments after Russia launched an attack on Ukraine.

The EURUSD pair is down roughly 140 pips ever since Thursday’s opening, but there are no technical signs that it would change course in the near term. The pair is clearly bearish in its daily chart, collapsing below all of its moving averages and with technical indicators heading firmly lower within negative levels.

In the above 4-hour chart, the pair is oversold but poised to extend its slump. EURUSD is far below all of its moving averages, and the 20 SMA has turned sharply lower below the longer ones. At the same time, technical indicators maintain their bearish slopes, despite being at extreme levels. The pair is dangerously close to this year’s low at 1.1120, the level to break to see another leg south later in the day. 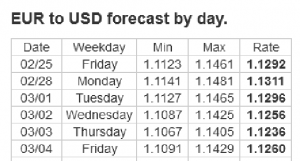