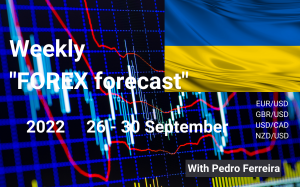 After having touched its lowest level since October 2002 at 0.9809 earlier in the day, EURUSD has staged a rebound in the European session and turned positive on the day above 0.9850. In case the pair reclaims 0.9880 and starts using that level as support, it could extend its recovery in the near term.

The US Federal Reserve raised its policy rate by 75 basis points (bps) as expected on Wednesday. The dot plot revealed that policymakers project the terminal rate to be at 4.6% in 2023, compared to 3.8% in June’s Summary of Economic Projections. During the press conference, FOMC Chairman Jerome Powell said that there was no “painless way” to bring inflation down and added that a delay in lowering inflation would only lead to more pain.

Boosted by the hawkish policy outlook seen in the dot plot and Powell’s remarks, the US Dollar Index reached its highest level in two decades at 111.80 during the Asian session on Thursday.

The improving market mood, however, seems to be making it difficult for the dollar to preserve its strength. Additionally, the sharp upsurge witnessed in the EURCHF pair following the Swiss National Bank’s decision to hike its policy rate by 75 bps, rather than the market speculation of 100 bps, suggests that the euro is capturing some of the outflows out of the Swiss franc.

In the second half of the day, the US economic docket will feature the weekly Initial Jobless Claims data, which is likely to be ignored by market participants. US stock index futures are trading in positive territory during the European session. In case Wall Street’s main indexes gain traction after the opening bell, the dollar could deepen its downward correction and allow EUR/USD to continue to stretch higher.

EURUSD erased its daily losses and turned positive, eyeing 0.9900 in the European session. The US Dollar Index has pulled away from the multi-decade highs, helping the pair stage a technical correction. Investors await the BoE rate decision and EU consumer sentiment data.

For next week, I decided to present to you, the biggest concerns by major Central Banks over inflation, which makes me conclude fundamentally the EURUSD has more downside potential, at least until the next ECB meeting.

FOMC: Central Banks on the Verge of Panic Over Inflation

The increase in the overall CPI has only been so small because of the sharp drop in energy prices. Closely monitored core inflation , which excludes pesky volatile categories, such as food and energy, was 0.6% monthly.

Investors now believe that the Fed will continue to raise interest rates, until it can demonstrate that it controls inflation.

With a 75 bps hike this week, the Fed’s target range for the federal funds rate will reach 3.0-3.25%, and futures now point to the likelihood of a rate hike above 4% by year-end, which implies further strong hikes at the two remaining Federal Open Market Committee (FOMC) meetings in early November and mid-December.

The Bank for International Settlements (BIS), commonly regarded as the central bank of central banks, expressed its opinion Monday in support of higher rates in the U.S. and other regions, even though they pose a threat of recession.

Philip Lane, a chief economist at the European Central Bank (ECB), said last week that further key rate hikes were needed after shocking markets with a 75-bp increase earlier this month. Europe is suffering from inflation even more than the U.S. The region’s worsening energy crisis could cripple the economy and cause serious hardship for households.

Lane has been among those who have ignored the threat of inflation for months, so his admission that further rate hikes are necessary is an important signal.

The Fed began raising interest rates early and is doing so more aggressively, leaving other central banks in a catch-up role, with the Fed’s rate hikes causing the dollar to strengthen sharply in the foreign exchange market. The rise of the dollar exacerbates inflation in other countries because the lion’s share of international trade is settled in U.S. currency. When other currencies fall against the dollar, imports from the countries concerned become more expensive.

Major currencies such as the Euro , the Pound Sterling , and the Japanese Yen are now falling against the dollar, putting pressure on the central banks of the countries concerned. Even the Chinese currency has fallen below the threshold with the dollar rising above 7 yuan last week. The dollar index, which reflects the value of the U.S. currency against other major currencies, is up 14% this year. 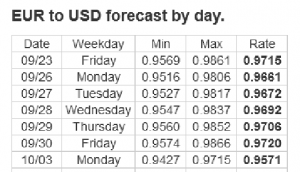