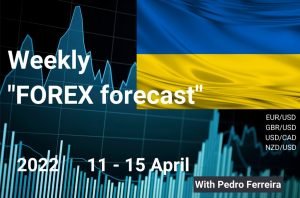 EURUSD has extended its weekly slide on Wednesday and ended up closing the fifth straight trading day in negative territory. The pair managed to stage a technical correction during the Asian trading hours on Thursday but struggled to gather bullish momentum. Although the technical picture points to oversold conditions, it’s too early to count out further losses.

The minutes of the FOMC’s March meeting showed late Wednesday that many participants noted that they would have preferred a 50 basis point (bps) hike at that meeting.

Additionally, the publication confirmed that the balance sheet reduction would start after the May meeting. With the immediate market reaction, the benchmark 10-year US Treasury bond yield advanced to its strongest level in nearly three years and helped the greenback outperform its rivals.

On the flip side, European Central Bank (ECB) Chief Economist Philip Lane argued that it was important for them not to overreact to the surge in inflation. The policy divergence between the ECB and the Fed continues to widen as the European economy faces a heightened risk of recession amid the ongoing Russia-Ukraine crisis.

Meanwhile, the European Union is reportedly looking to delay the ban on Russian coal imports to mid-August from mid-July. Nevertheless, this headline doesn’t seem to be having a noticeable impact on the shared currency. Later in the day, the ECB will release the accounts of its March monetary policy meeting. Even if there is a hawkish tone in the ECB’s publication, the shared currency’s gains could remain limited because the geopolitical developments since March 10 have not been in favor of the euro.

EURUSD recovers modestly on ECB accounts and turned positive on the day near 1.0900 in the European trading hours. The accounts of the ECB’s March policy meeting revealed that a large number of members held the view that the current high level of inflation and its persistence called for immediate further steps towards policy normalization.

The Relative Strength Index (RSI) indicator on the above four-hour chart stays below 30, suggesting that the pair remains oversold in the near term. The descending trend line coming from late March, however, stays intact and sellers are likely to remain in control until the pair steadies above that line. 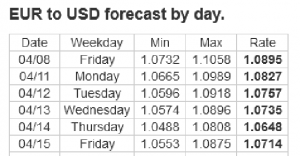