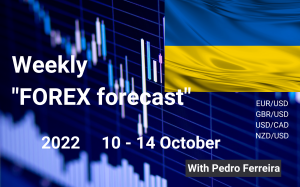 After having lost nearly 100 pips on Wednesday, EURUSD has managed to hold its ground early Thursday. The pair trades in a narrow channel at around 0.9900 in the European session as investors wait for the European Central Bank (ECB) to release the accounts of its September policy meeting.

Earlier in the session, the data from Germany showed that Factory Orders declined by 2.4% on a monthly basis in August following July’s contraction of 1.1%. This reading came in much worse than the market expectation for a decrease of 0.7% but had little to no impact on the shared currency’s valuation. Additionally, Eurostat announced that Retail Sales in the euro area fell by 2% in August, compared to analysts’ estimate of -1.7%.

Following the ECB’s decision to hike its policy rate by 75 basis points in September, several ECB policymakers voiced their support for one more 75 bps increase in the next meeting. However, others argued that there were no signs of inflation expectations getting de-anchored in the eurozone and that a faster than warranted increase in key rates could weigh on the outlook. In case the ECB’s publication provides clarity regarding the size of the next hike, the euro’s market valuation could be impacted. If investors are convinced of one more 75 bps rate hike, EURUSD could gain traction and vice versa.

In the second half of the day, the US Department of Labor’s (DOL) weekly Initial Jobless Claims data will be looked upon for fresh impetus. On Wednesday, ADP reported that employment in the private sector rose by 208,000 in September, slightly better than the market projection of 200,000.  Additionally, the Employment Index component of the ISM’s Services PMI survey rose to 53 in September from 50.2 in August. These figures helped the dollar gather strength and a similar market reaction could be witnessed if the DOL reports that less than 200K people applied for unemployment benefits for the second straight week.

EURUSD is trading little changed on the day below 0.9900 in the European session on Thursday. Eurostat reported that Retail Sales declined by 0.3% in August in the euro area but this data was largely ignored by investors who await the ECB’s meeting accounts.

EURUSD returned below the 200-period SMA on the four-hour chart and the Relative Strength Index (RSI) indicator declined toward 50, pointing to a loss of bullish momentum.

For next week, It seems that the euro currency pair is ready to resume its downtrend, after reaching the resistance range and the downtrend line, as illustrated in the following chart.