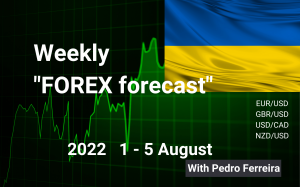 EURUSD has lost its bullish momentum after having gained nearly 100 pips in the late American session on Wednesday. The pair trades near the upper limit of its 10-day old range and needs to clear the 1.0230 level to continue to push higher.

Although the US Federal Reserve hiked its policy rate by 75 basis points (bps) to the range of 2.25-2.5% on Wednesday, the dollar faced heavy selling pressure. During the press conference, FOMC Chairman Jerome Powell said that they will not be offering any rate guidance from now on and added that they will adopt a “meeting-by-meeting” approach. Following these comments, the probability of one more 75 bps rate increase in September dropped to 30% from 47.3% a week ago.

Later in the day, the US Bureau of Economic Analysis will release its first estimate of the second quarter Gross Domestic Product (GDP) growth. The US economy is forecast to expand at an annualized rate of 0.4% following the first quarter’s 1.6% contraction.

According to the CME Group’s FedWatch Tool, markets are pricing in a 30% probability of one more 75 bps hike in September. With a stronger-than-expected GDP print, hawkish Fed bets could return and help the dollar regather its strength. On the other hand, EURUSD recovery could pick up steam in case the US economy fails to rebound. The US Department of Labor’s weekly Initial Jobless Claims data will also be featured in the US economic docket.

Meanwhile, the data from the euro area showed that the Consumer Confidence Index declined to -27 in July from -23.8 in June. Additionally, the Economic Sentiment Indicator fell to 99 from 103.5 in the same period.

EURUSD drops toward 1.0150 as dollar rebounds. The currency pair has declined below 1.0200 during the European trading hours on Thursday. The data from the euro area revealed a sharp drop in economic sentiment and business confidence in July. Investors await the second-quarter GDP growth data from the US.

The Fibonacci 38.2% retracement level of the latest downtrend forms strong resistance at 1.0230, which is also the upper limit of the 10-day-old trading range. With a four-hour close above that level, the pair could target 1.0300 (psychological level, Fibonacci 50% retracement) and 1.0320 (200-period SMA on the four-hour chart).

For next week, EURUSD successfully maintained the 1.0 USD level. This is a significant psychological level! As per my Elliott Wave analysis, this downtrend should be over, and now, it is expected a corrective move to the upside. An impulse Elliott Wave has been successfully completed, hence we should see some profit taking in the very short-run. On the daily chart, we can spot a beautiful descending parallel channel , and I think the bulls can step in to destroy this pattern. As you may noticed on the following chart, we had 2 fake-outs during this downtrend, indicating a corrective move. Usually, the third breakout is real!  The profit target is at 0.618 FIB + the start of wave 4. 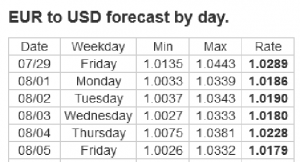