In broad terms, financial leverage describes the amount of borrowed money, or debt, used to finance the purchase of assets. It is used by traders who expect the income, or capital gain, from the asset acquired, to exceed the related cost of borrowing.
Also commonly known as gearing, leverage refers to the relative proportion of debt to equity used by a corporation to fund its operations. The higher the proportion, the higher the gearing.
A highly leveraged firm is more susceptible to downturns in the economy than one with lower gearing, because it needs to meet interest payments and service its debt obligation out of its cash flow which may be stretched in recessionary periods.
However, a high gearing is not necessarily a bad thing – when interest rates are low, borrowing can be a cheaper option to fund investments than asking shareholders to finance investments, who will be looking for returns in the form of stock appreciation and/or dividends.

In Forex Trading, leverage represents the ratio of the trader’s funds relative to the credit offer by the broker. One of the reasons that so many people are attracted to FX Trading is because the amount of leverage on offer is often greater than that available with other investment vehicles like stocks. In other words, more money can be borrowed with a lower margin commitment. This offers traders the ability to earn substantial profits when currencies move as anticipated. However, it can also backfire, and expose the investor to substantial losses if one of the underlying currencies moves the other way.
In order to trade in the Forex market, a trader must first open a margin account with a licenced broker – that allows them to buy currencies with borrowed funds, in exchange for the deposit of cash or other assets as collateral to cover the risk.
The amount of leverage provided depends on the broker, the risk profile of the trader, and the size of the trading position, but historically ranged from 50:1 to 100:1. A 50:1 ratio means that the margin – cash deposited in the trading account is 1/50 = 2%; a 100:1 ratio requires a margin of 1%. 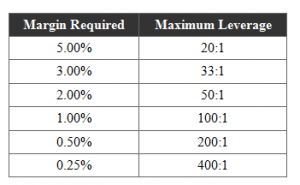 (The standard lots are this size because successful FX trading is based on exploiting incremental movements between two paired currencies. The potential profit from any one trade is not worth the associated cost – it is only when it is combined in a large standard “lot” that forex trading becomes commercially viable).
By contrast, the amount of leverage typically available when trading in stocks is 2: 1 and the futures market around 15:1. The reason that the leverage on offer is so much greater is because normally Forex Markets only move by a small proportion every day (less than 1% during normal intraday trading) – therefore, the total market exposure to large and sudden fluctuations is much less.
Theoretically, if a trader has US $10,000 in their trading account, and they take a standard trading position of US $100,000, then they will be trading with 10 times the leverage on their account. In reality, however, traders rarely use their entire accounts as margin for each of their trades, as this exposes them too great a risk if the market moves against them.

The dangers of leverage in Forex markets

Whilst Forex markets offer the opportunity to earn serious profits, the statistics suggest that, for the majority of traders, the opposite is the case – between 80% and 90% of all trades end in losses.
This is where high leverage can actually work against a trader, and why it has become known as a “double-edged” sword. Whilst leverage is used by investors to increase the return on investments, it increases also the exposure to risk as it magnifies currency market movements. And, due to the lot sizes of FX markets, a highly leveraged trade can quickly deplete a trading account.
A mistake commonly made by those new to FX trading is to use the highest leverage possible in order to maximise the potential profit. However, if the situation goes the other way – as occurred in 2015, for example, when Switzerland abandoned the Euro/Swiss Franc peg – then an account can be quickly wiped out.
Part of the trouble, historically, has been aggressive marketing by various Forex brokers, who stand to gain from the increased margin that they stand to make when a trader finds themselves in a losing position.
That is why some regulatory authorities have taken action to limit the amount of leverage to which investors have access. For example, the European Security and Markets Authority (ESMA) has reduced the leverage that brokers can offer retail traders to 30:1 for major currency pairs, whilst, for non-major currency pairs it is restricted to 20:1. They have also prohibited the use of exotic financial instruments such as binary options and CFDs (Contracts for Difference).
However, experienced traders do not rely on market regulation alone to limit their exposure, but are wise enough to have learned that the key to success is preventing losses, more than chasing large profits. For example, they will always use a protective stop loss strategy – a strategy designed to safeguard existing gains, or restrict losses via a stop-loss order or limit order.
Another tactic often used is to implement a maximum daily loss amount – once this threshold has been reached, all positions must be closed, and no new trades can be initiated until the next daily trading session begins.
It is not just losses that should be capped. Techniques like trailing stops can be used to realise gains when a currency has moved away from a current market price.
The main defence that a trader has though is not to use all the leverage that has on offer to them. Choosing to restrict the amount of trading capital that they use on any one position may not yield them any excess profits but offers much greater certainty of long-term success.

Margin-based leverage is calculated by dividing the total value of the transaction by the amount of margin that the trader is required to deposit:
Margin-based leverage = Total Value of Transaction/Margin Required.
For example, if a trader was required to deposit 1% of the total value traded, and intended to trade in one standard lot of US $/Euros, equivalent to US $100,000, then the required margin would be US $1,000. This means that the leverage would be 100:1

Real leverage (the amount that is actually at risk) divides the total; face value of open positions by the trading capital. 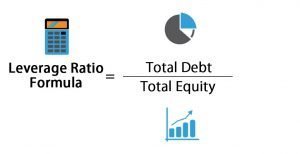 Whilst these leverage ratios can be determined by hand, most traders instead rely on the MetaTrader electronic trading platform, used by online retail foreign exchange traders to calculate these figure for them.
MetaTrader 4, and its successor, MetaTrader 5, are used by brokers and trading clients in Forex markets, who use it to manage their accounts, place orders, and see live streaming prices. Recently, the development of plug-ins such as the Money Account Manager by KeySoft has extended the utility of these platforms to the entire FX trading community.

The high amounts of leverage on offer in Forex markets, compared to the equivalents on offer in stock and futures markets makes them attractive to traders, enabling investors to take large positions with relatively small amounts of capital. 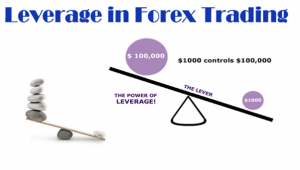 However, high leverage can mean high risks, a factor that regulatory authorities have addressed with measures limiting the amount of leverage that brokers can offer to retail traders. And given that the vast majority of FX trades results in losses, then novices clearly need to be wary before starting to trade.
However, that does not mean that leverage is something to be feared. By using small amounts on each trade, using protective loss strategies, and daily maximum loss limits, the downside risks can be managed effectively, whilst gains can be locked in and realised.