Cryptocurrency Heard for the Month: 1 December 2022 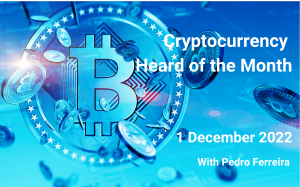 November was a month of major changes for the global crypto market, with the FTX fall leaving skeptics and crypto enthusiasts confused about the future of the sector.

The global crypto market cap fell to as low as $730 billion but managed to make a mild recovery from the multi-month lows seen in November. The last month saw Bitcoin (BTC), Ethereum (ETH), and most altcoins dip to their multi-month price lows as the FTX conundrum spelled trouble for crypto holders.

However, short-term gains have been tempting investors to get back into the market. Crypto market advocates believed that BTC and alts were, in fact, available at a Black Friday Discount with prices this low. Larger market volatility and sharp price swings kept challenging analysts’ predictions of a bright future. In addition to that, regulatory concerns loomed over the global crypto landscape as participants speculated the fate of FTX founder Sam Bankman-Fried.

With skepticism around cryptocurrencies on the table once again, mainstream media weighed in on SBF’s chances of landing in prison.

Sir Jon Cunliffe, the Deputy Governor of the Bank of England has been weighing on regulations.

With only one month left before the year ends, the crypto market has kept investors and traders baffled by its sudden moves, but everything could change in December 2022.

The following were our suggested entry price for:

So, here are some crypto predictions for December 2022.

While Bitcoin’s price tested the multi-month low of around $15,000 and was still in a larger bearish trend, a lot of analysts were of the opinion that Bitcoin’s price had bottomed. On the downside, we believe BTC price will hold the $15,000 mark.

On the other hand, an analyst advocated that a BTC dead cross was coming soon, and Bitcoin price was close to the bottom. According to the analysts’ thesis, when Bitcoin UTXO’s short-term dominance falls below long-term dominance, the price of Bitcoin shows a significant rise.

Another analyst called CryptoKaleo on Twitter predicted that LTC price could make some blasting moves before the end of this year. The analyst said that LTC/BTC chart appeared to be long overdue for a solid pump. The analyst further stated LTC’s price works in a way where it slowly bleeds down sideways for a long time. That is followed by a quick pump up to 0.02 BTC when the global crypto market remains bearish.

Ethereum is a blockchain-based software platform that can be used for sending and receiving value globally with its native cryptocurrency, ether, without any third-party interference. But it can also do much more than that. Unlike traditional apps, these Ethereum-based applications, called “decentralized applications,” or dapps, are self-executing thanks to the use of smart contracts.

Smart contracts are code-based programs that are stored on the Ethereum blockchain and automatically carry out certain functions when predetermined conditions are met. That can be anything from sending a transaction when a certain event takes place or loaning funds once collateral is deposited into a designated wallet. The smart contracts form the basis of all dapps built on Ethereum, as well as all other dapps created across other blockchain platforms.

In August 2014, Ethereum launched its native token, ether, through an initial coin offering (ICO). Some 50 million ETHs were sold at a price of $0.31 per coin, raising over $16 million for the project. Unlike many other cryptocurrencies, Ethereum’s cryptocurrency has an unbounded supply, meaning there is no limit to how many ether can enter circulation.

According to the project’s official website, the annual inflation rate of ether is about 4.5%. Block rewards have been reduced two times since the first ever Ethereum block was mined. That block is known as the genesis block.

The reductions in block rewards aren’t programmed into Ethereum’s code like Bitcoin’s halving events are. Instead, members of the community propose changes, called “Ethereum Improvement Proposals,” or EIPs, and the rest of the community votes on whether to include the proposals in updates to Ethereum’s software code. Here is a breakdown of ether’s issuance schedule to date.

The issuance rate is also affected by a feature known as the “difficulty bomb.” This refers to a mechanism that increases the difficulty of mining on the original Ethereum blockchain (prior to the transition to the proof-of-stake Ethereum 2.0 blockchain. See below).

Increasing mining difficulty lengthens the time it takes for miners to discover new blocks. That means less ether enters circulation in the form of block rewards, which in turn tapers overall issuance. This mechanism was activated, reset and delayed several times between 2017 and 2020, mainly because Ethereum developers needed more time to work on key updates ahead of the 2.0 upgrade.

From ether’s official launch date in 2014 to March 2017, the token’s price remained rangebound between $0.70 and $21. It wasn’t until the 2017 bull crypto market started to pick up in May of that year that ETH price went above $100 for the first time. From there, ether skyrocketed to a peak of $414 in June 2017 before correcting. It took another five months for bullish momentum to regain strength. By that point, the entire crypto market was starting to experience huge buying pressure, which elevated almost every crypto token to new highs. By January 2018, ETH’s price peaked at $1,418 before it fell sharply.

It took about three years for the second-largest cryptocurrency by market cap (behind bitcoin) to retest its previous all-time high price. Between February and May 2021, eth’s price more than tripled to set a new all-time high of $4,379.

Doge is the native cryptocurrency of dogecoin, a parody cryptocurrency based on a viral internet meme of a Shiba Inu dog. At first, the crypto project was created purely as a mockery of other cryptocurrency projects that were being launched at the time.

The cryptocurrency is essentially a direct copy of Litecoin’s code and can be used to transfer value over the internet like all other digital assets. Doge was never designed to have any real-world utility beyond being a simple blockchain-based payment system; however, it quickly amassed a diehard community of fans who found and developed new use cases for it. Those included a third-party online tipping service, which led to doge becoming a leading tipping coin on social media platform Reddit and crowdfunding charitable causes using dogecoin.

XRP is the native token of the XRP Ledger and can be used as a currency to transact on the platform and other supported platforms.

XRP is the native cryptocurrency of XRP Ledger, which is an open-source, public blockchain designed to facilitate faster and cheaper payments. Sending payments overseas using the legacy financial system typically takes one to four business days and can be expensive. If a person uses XRP as a bridging currency, it’s possible to settle cross-border transactions in less than five seconds on the open-source XRP Ledger blockchain at a fraction of the cost of the more traditional methods.