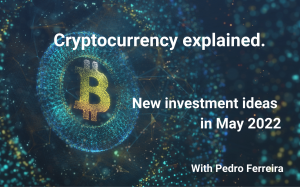 Just about everyone has heard of cryptocurrency by now, but most people still do not really understand what it is.  So, we will try to summarize it as much as possible, before selecting the cryptocurrencies that may have the best potential return on investment, for the year and month.

More than just a form of digital cash, cryptocurrency and the technology underlying it have the potential to transform the financial sector and many other industries as well.

Cryptocurrency, sometimes called crypto-currency or crypto, is any form of currency that exists digitally or virtually and uses cryptography to secure transactions. Cryptocurrencies do not have a central issuing or regulating authority, instead using a decentralized system to record transactions and issue new units. 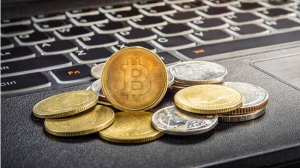 Cryptocurrency is a digital payment system that does not rely on banks to verify transactions. It is a peer-to-peer system that can enable anyone anywhere to send and receive payments. Instead of being physical money carried around and exchanged in the real world, cryptocurrency payments exist purely as digital entries to an online database describing specific transactions.

When you transfer cryptocurrency funds, the transactions are recorded in a public ledger. Cryptocurrency is stored in digital wallets.

Cryptocurrency received its name because it uses encryption to verify transactions. This means advanced coding is involved in storing and transmitting cryptocurrency data between wallets and to public ledgers. The aim of encryption is to provide security and safety.

The first cryptocurrency was Bitcoin, which was founded in 2009 and remains the best known today. Much of the interest in cryptocurrencies is to trade for profit, with speculators at times driving prices skyward.

From Bitcoin and Ethereum to Dogecoin and Tether, there are thousands of different cryptocurrencies, which can make it overwhelming when you are first getting started in the world of crypto. To help you get your bearings, these are the top 10 cryptocurrencies based on their market capitalization, or the total value of all of the coins currently in circulation, as of May 12, 2022.

Created in 2009 by Satoshi Nakamoto, Bitcoin (BTC) is the original cryptocurrency. As with most cryptocurrencies, BTC runs on a blockchain, or a ledger logging transactions distributed across a network of thousands of computers. Because additions to the distributed ledgers must be verified by solving a cryptographic puzzle, a process called proof of work, Bitcoin is kept secure and safe from fraudsters. Bitcoin’s price has skyrocketed as it’s become a household name. In May 2016, you could buy one Bitcoin for about $500. As of May 12, 2022, a single Bitcoin’s price was around $29,000. That’s growth of more than 5,700%.

Both a cryptocurrency and a blockchain platform, Ethereum is a favorite of program developers because of its potential applications, like so-called smart contracts that automatically execute when conditions are met and non-fungible tokens (NFTs). Ethereum has also experienced tremendous growth. From April 2016 to the beginning of May 2022, its price went from about $11 to over $2,000, increasing almost 18,000%.

Unlike some other forms of cryptocurrency, Tether is a stable-coin, meaning it’s backed by fiat currencies like U.S. dollars and the Euro and hypothetically keeps a value equal to one of those denominations. In theory, this means Tether’s value is supposed to be more consistent than other cryptocurrencies, and it is favored by investors, who are wary of the extreme volatility of other coins.

Like Tether, USD Coin (USDC) is a stable-coin, meaning it’s backed by U.S. dollars and aims for a 1 USD to 1 USDC ratio. USDC is powered by Ethereum, and you can use USD Coin to complete global transactions.

Binance Coin is a form of cryptocurrency that you can use to trade and pay fees on Binance, one of the largest crypto exchanges in the world. Since its launch in 2017, Binance Coin has expanded past merely facilitating trades on Binance’s exchange platform. Now, it can be used for trading, payment processing or even booking travel arrangements. It can also be traded or exchanged for other forms of cryptocurrency, such as Ethereum or Bitcoin. BNB’s price in 2017 was just $0.10. By early May 2022, its price had risen to around $279, a gain of approximately 280,000%.

Created by some of the same founders as Ripple, a digital technology and payment processing company, XRP can be used on that network to facilitate exchanges of different currency types, including fiat currencies and other major cryptocurrencies. At the beginning of 2017, the price of XRP was $0.006. As of May 12, 2022, its price reached $0.39, equal to a rise of more than 6,400%.

Binance USD is a stable-coin that was founded by Paxos and Binance in an effort to create a cryptocurrency backed by the US dollar. To maintain this value, Paxos holds an amount of US dollars that is equal to the total supply of BUSD. As with other stable-coins, BUSD gives traders and crypto users the ability to engage in transactions with other crypto assets while minimizing the risk of volatility.

Somewhat later to the crypto scene, Cardano is notable for its early embrace of proof-of-stake validation. This method expedites transaction time and decreases energy usage and environmental impact by removing the competitive, problem-solving aspect of transaction verification present in platforms like Bitcoin. Cardano also works like Ethereum to enable smart contracts and decentralized applications, which are powered by ADA, its native coin.

Developed to help power decentralized finance (DeFi) uses, decentralized apps (DApps) and smart contracts, Solana runs on a unique hybrid proof-of-stake and proof-of-history mechanisms that help it process transactions quickly and securely. SOL, Solana’s native token, powers the platform. When it launched in 2020, SOL’s price started at $0.77. By mid May 2022, its price was around $48.70, a gain of more than 6,200%.

Dogecoin was famously started as a joke in 2013, but rapidly evolved into a prominent cryptocurrency thanks to a dedicated community and creative memes. Unlike many other cryptos, there is no limit on the number of Dogecoins that can be created, which leaves the currency susceptible to devaluation as supply increases. Dogecoin’s price in 2017 was $0.0002. By mid May 2022, its price was at $0.08, up almost 40,000%.

New Investment Ideas in Cryptocurrencies in May

One of the top “Ethereum killers” in the market, Solana has experienced one of the most impressive surges in recent years among large-cap tokens as a result of how this project was built. Using a unique proof-of-history consensus mechanism, Solana has found a way to offer incredible transaction speeds alongside rock-bottom transaction costs. For users looking to place smaller transactions, or who simply want to avoid the sky-high gas fees with other networks such as Ethereum, the benefits of Solana’s network are obvious. 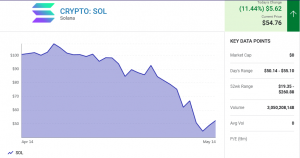 These advantages have led to impressive growth in total value locked (TVL) across the Solana ecosystem over the past year. Total value locked refers to the amount of capital deployed in decentralized applications across a given network. Currently, the Solana ecosystem has approximately $5.4 billion of value locked in Solana-based applications. While this is well off from its high of $15 billion late last year, it still represents impressive growth from TVL of around $1.6 billion a year prior. Unsurprisingly, some might say that Solana’s deteriorating value since late last year may be the root cause of much of this TVL destruction. Transaction volumes remain high, and this network is still very popular. So popular, in fact, that Solana has experienced a number of outages that have shaken investor confidence in this network’s ability to scale.

That said, Solana has proposed a series of mitigation efforts to combat these concerns. And as far as problems go, seeing astronomical volume on a particular network may be considered the kind of growing pains investors want to see.

Avalanche is yet another “Ethereum killer” that is seen similar price action to Solana of late. What makes this project unique is the use of subnets (or sub-networks) on Avalanche’s network, which create a network of interoperable blockchains supported by custom validator sets. In plain speak, subnets allow for increased scalability, relative to more existing “siloed” blockchains that do not talk to each other. By having multiple sub-networks tied to Avalanche’s main network, interoperable projects are made much easier. Additionally, there are a number of benefits from the application development side. Developers can use these sub-networks to build-out projects, issue their own tokens, and secure and validate their network with their own validators. What is equally impressive is that each of these subnets benefits from the security and stability of shared staking on Avalanche’s main net.

For investors considering Avalanche, this means that as Avalanche’s ecosystem grows, so too will staking demand and rewards. As more tokens get locked in via staking contracts, less supply should mean higher prices over time. And as we have seen, Avalanche’s ecosystem is robust, actually one spot higher than that of Solana, at fourth place in the rankings among top projects sorted by TVL. Down nearly 65% from its peak, Avalanche is starting to look very attractive at these levels.

VeChain’s concept is to utilize the digital ledger, which is blockchain technology, to help streamline the tracking of shipments of goods around the globe. By integrating the blockchain into QR codes, VeChain has found a way to improve the business processes for key clients, which are mostly located in China.

With the negative view the Chinese government has taken toward crypto, VeChain’s tokens have lost a tremendous amount of value since their peak. However, for those taking the view that technological adoption in China and around the world for such services will pick up, this platform is one that may have strong growth potential.

This website uses cookies to improve your experience while you navigate through the website. Out of these, the cookies that are categorized as necessary are stored on your browser as they are essential for the working of basic functionalities of the website. We also use third-party cookies that help us analyze and understand how you use this website. These cookies will be stored in your browser only with your consent. You also have the option to opt-out of these cookies. But opting out of some of these cookies may affect your browsing experience.
Necessary Always Enabled
Necessary cookies are absolutely essential for the website to function properly. These cookies ensure basic functionalities and security features of the website, anonymously.
Functional
Functional cookies help to perform certain functionalities like sharing the content of the website on social media platforms, collect feedbacks, and other third-party features.
Performance
Performance cookies are used to understand and analyze the key performance indexes of the website which helps in delivering a better user experience for the visitors.
Analytics
Analytical cookies are used to understand how visitors interact with the website. These cookies help provide information on metrics the number of visitors, bounce rate, traffic source, etc.
Advertisement
Advertisement cookies are used to provide visitors with relevant ads and marketing campaigns. These cookies track visitors across websites and collect information to provide customized ads.
Others
Other uncategorized cookies are those that are being analyzed and have not been classified into a category as yet.
SAVE & ACCEPT
Ask a question