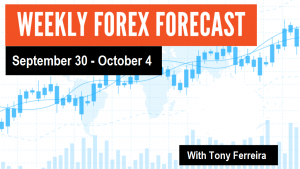 Last week, we had a short-term bullish sign on the GBPUSD and our technical trade suggested to buy it below 1.2452 and selling it above 1.2750. This Monday, GBPUSD opened at 1.23453, reaching the high of 1.2503. Hence, the opportunity trade on the long side was for 1.27% gain. We have also stated that we remain long-term bearish on GBPUSD. The GBPUSD long position for this week was fundamentally based on the Supreme Court ruling, which the pound was initially lifted. However, the Sterling has settled lower again on market perceptions that uncertainties about outcomes remain high and all possibilities are still on the table.

It appears Sterling might now have left its high-water mark, and we would be wary of further downside in the current environment as markets consider the non-neglible risks of a ‘no deal’ Brexit on October 31. The Prime Minister’s strategy to call for an early General Election has not worked, and he will double-down on delivering a new Brexit deal. However, judging by the acrimonious exchanges in the House of Commons on Wednesday it is difficult to see how any cross-party consensus can be achieved.
Therefore any deal that is struck with the EU at the October 17 European Council meeting will find itself unable to pass through the House of Commons. Therefore, it rests to the Prime Minister to deliver on his pledge to exit the EU on October 31.

On Wednesday, the pound fell to one-and-a-half week lows against the dollar, pressured lower by the prospect of early U.K. elections with just five weeks to go until the Brexit deadline. The British pound was down 0.8% at 1.2387 by 9:19 AM ET (1:19 GMT), and the U.K. 10-year benchmark bond yield fell to 0.51%. Based on these new fundamental political facts, our short-term and long-term sentiment on GBPUSD is bearish, but we are waiting for a technical selling signal.

As we may notice from the Pound-Dollar chart a Head and Shoulders formation may be about to be formed. However, we will need the confirmation of the right shoulder, which will form the neck of the head.

In case, the remaining of the week GBP trades sideways or slightly down from the current price levels, between 1.2354 and 1.2248, we will get a strong sell signal because once the Neckline is broken, the GBPUSD is expected to decline by the same amount as the change in price from the Neck line to the top of the head. So we would set the sell position as follows:

For the week from September 30 October 4, we will be waiting for the right shoulder formation, and place a sell order (short position) on the GBPUSD, when it breaks the neck line at 1.2300. After such confirmation, we would prefer to set the sell order for GBPUSD at or below 1.2300 and buy it back (closing the short position) at or above 1.2071. 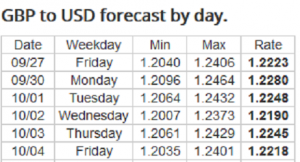 Remember to place stop losses, according to your risk tolerance as unexpected news coming to the market, may significant affect trends and prices. Until next article, wealthy trading.

Disclosures: The material provided herein is for informational purposes only. It does not constitute an offer to sell or a solicitation of an offer to buy any interests in the GBP/USD or any other securities. Further, This overview may include or be based in part on projections, valuations, estimates and other financial data supplied by third parties, which has not been verified by Tony Ferreira, nor KeySoft. Any information regarding projected or estimated investment returns are estimates only and should not be considered indicative of the actual results that may be realized or predictive of the performance of the GBP/USD or any underlying security. Past investment results of any underlying managers should not be viewed as indicative of future performance of the GBP/USD.