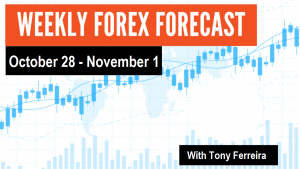 Last week, we were waiting for a selling opportunity for the week from October 21 to October 25 at or above 1.2855, but only when the Relative Strength Index was at or above 75 (indicating an over-bought position). The selling opportunity happened on Monday, October 21 and Tuesday October 22, when RSI was at or above 75%, having GBPUSD at 1.30008 and 1.29220, respectively. If one were to cover the GBPUSD short position on Wednesday October 23 or today, it could have been done at a rate of 1.28411 or 1.2822, locking in a potential daily gain of 1.24% and 0.78%, respectively. 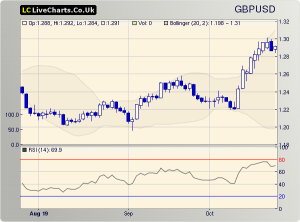 With the UK parliament passing the Letwin amendment, several pieces of legislation need to be passed before UK Prime Minister Boris Johnson’s Brexit deal can be ratified. Several key EU leaders have said they do not want to extend the Brexit deadline even as UK PM Johnson requested an extension per the Benn Act; a no-deal, hence, hard Brexit is now seen as unlikely. However, the question remains: a deal or no deal? At the time of writing this article, there is no clear answer, but only one certainty that the high volatility is set to prevail. GBP/USD’s range may exceed the 500 pips seen now as an accord is within reach. Apart from Brexit headlines, top-tier figures from the UK and US-Sino trade talks may also have an impact.

Possibility for Another Brexit Extension

While UK PM Johnson is surely disappointed that he will not be able to execute his Brexit deal immediately, there is still scope for it to pass over the course of the next week. Indeed, with French President Emmanuel Macron saying that another extension is “in no one’s interest,” and UK Brexit Minister Michael Gove saying that “if we don’t back this deal, then the risk is that the European Council may not grant an extension,” it seems that the priority is now rushing through the various pieces of legislation through UK parliament before an extension can be decided upon. To this end, given that the Letwin amendment passed on Saturday, it appears that there is still an appetite to get Brexit done – just on the right terms by the UK parliament. Any weakness seen in GBP-crosses at the start of the week may be quickly erased as the odds of a no-deal, hard Brexit are still seen as low.

The forex economic calendar will produce little waves for the GBP-crosses over the coming days, keeping market participants’ collective attention on the news wire for the latest Brexit deal updates. But in general, UK economic data has stabilized in recent weeks, after a strong run through the end of the summer. 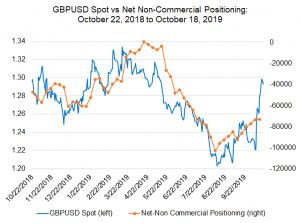 The Citi Economic Surprise Index for the UK, a gauge of economic data momentum, closed on Friday, October 18 at 1.1, slightly lower than where it was one month earlier at 6.3, but significantly higher from three months earlier at -58.7 on July 19.

Further, there is yet to be a short covering rally for GBPUSD. Looking at positioning, according to the CFTC’s COT report for the week ended October 15, speculators decreased their net-short British Pound positions slightly, from 72.2K to 73K contracts. The gains by the British Pound over the course of October have been without a significant short covering rally in the futures market, which is somewhat surprising. As such, there may be more room for the British Pound to recover should short positions begin to cover, an event only likely to transpire around a Brexit deal.

The following GBPUSD Technical Analysis chart indicates a surge in GBP/USD, which sent it to the 200-day Moving Average, shattering the 50 and 100 SMAs on its way up. Momentum has turned positive and the Relative Strength Index remains below 70 or below overbought conditions.  The fresh high of 1.2705 is the first level of resistance. It is followed by 1.2780 which was the high point in June. Further above, 1.2960, 1.3050, and 1.3130 await cable. However, it may enter overbought conditions at some point. Looking down, support awaits at 1.2580, which was September’s high. Next, we find 1.2415 that separated ranges in September, followed by 1.2390 that played a similar role. The next level to watch is 1.2310, which capped it in August, followed by the recent low of 1.22.

WHAT HAPPENS TO THE BRITISH POUND: NO DEAL, HARD BREXIT

Under a no-deal, hard Brexit outcome, traders should expect further losses by the British Pound, with EURGBP likely to trade closer to parity (1.0000), GBP/JPY could trade towards 120.00, while GBP/USD could fall towards 1.1000 during the first 1-3-months of a no-deal, hard Brexit (keeping in mind that the European Central Bank and Federal Reserve would likely cut interest rates to prevent Brexit shocks from impacting either the Eurozone or US economies too significantly, thereby capping potential gains by the Euro and the US Dollar versus the British Pound).

WHAT HAPPENS TO THE BRITISH POUND: DEAL

Under an outcome that produces a Brexit deal, there may be further scope for recovery by the GBP-crosses. EUR/GBP is likely to trade closer towards 0.8300, GBP/JPY could trade towards 145.00, while GBP/USD could rally towards 1.3600 during the first 1-3-months of managed Brexit (keeping in mind that the European Central Bank and Federal Reserve would be less likely cut interest rates to prevent Brexit shocks from impacting either the Eurozone or US economies too significantly, thereby limiting potential losses by the Euro and the US Dollar versus the British Pound).

GBP/USD has dropped below 1.29 as the EU’s Brexit extension is awaited and PM Boris Johnson tries to decide if to proceed with elections or try to pass Brexit legislation. From a technical perspective, the pair on Wednesday managed to find decent support near the 61.8% Fibonacci level of the 1.3381-1.1959 downfall, which is closely followed by the 1.2800 round-figure mark. Failure to defend the said support levels might prompt some additional weakness and accelerate the fall further towards the very important 200-day SMA, currently near the 1.2720.

As of this Thursday, October 24th at 16:00 GMT, GBPUSD last trade was at 1.28455. Technical analysis indicates GBPUSD may be in the process of consolidating between 1.29 and 1.2733. However and for the coming week, fundamentals may disrupt technical analysis forecast. However, it is clear that a double top was tested in the recent week at 1.29524, with a lot of selling pressure at 1.29522 and 1.29517.

For next week, from October 28 to November 1, we continue to expect high volatility due to GBPUSD fundamentals, which will increase trading opportunities. We would sell GBPUSD on any rebound to 1.29517 to 1.29522 with the RSI at or above 75%, and covering it between S1 and S3 or 1.2864 and 1.2733, respectively for a potential ROI daily gain of 1.72%. Indeed and so far, for the month of October, it seems that we have picked the best pair currency to trade in the Forex markets, as the GBPUSD was the highest volatility currency pair, according to Forex market data, offering traders the best trading opportunities. 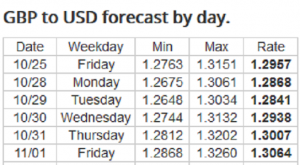 GBP to USD forecast for tomorrow, and next week.

Again, remember to place stop losses, according to your risk tolerance as unexpected news coming to the market, may significantly affect trends and prices. Until the next article, wealthy trading.

Disclosures: The material provided herein is for informational purposes only. It does not constitute an offer to sell or a solicitation of an offer to buy any interests in the GBP/USD or any other securities. Further, This overview may include or be based in part on projections, valuations, estimates and other financial data supplied by third parties, which has not been verified by Tony Ferreira nor KeySoft. Any information regarding projected or estimated investment returns are estimates only and should not be considered indicative of the actual results that may be realized or predictive of the performance of the GBP/USD or any underlying security.  Past investment results of any underlying managers should not be viewed as indicative of the future performance of the GBP/USD.