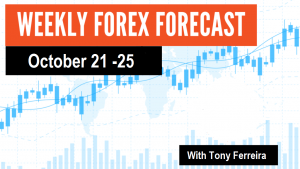 Last week, we were waiting for the GBPUSD to break the support level of 1.24380, which would have triggered a sell position. Monday, October 14, GBP set a high of 1.27999, low 1.26008, closing at 1.27841. Throughout this week and until October 16, GBPUSAD trade range was from 1.28754 and 1.26008, therefore and according to our technical analysis previous forecast and trading suggestion, there was no trading opportunity on the downside to place a short position on the GBPUSD.

GBP/USD has emerged from the abyss and soared amid fresh hopes for a Brexit deal. The EU Summit on Brexit is set to dominate trading and overshadow top UK data. Mid-October’s daily chart is showing that bulls are gaining momentum. However, our technical analysis and the Forex analysts poll is showing skepticism about the pound’s rally.

The question remains: a deal or no deal? At the time of writing this article, there is no clear answer but only one certainty that the high volatility is set to prevail. GBP/USD’s range may exceed the 500 pips seen now as an accord is within reach. Apart from Brexit headlines, top-tier figures from the UK and US-Sino trade talks may also have an impact.

Last week in Brexit talks we saw some light at the beginning of the tunnel, but it has been a week of two tales: despair up to midday on Thursday and a wild rally afterward. The EU deemed Boris Johnson’s plan as insufficient, but agreed to continue talking. Sources at the PM’s office spoke to the Spectator and seemed to threaten countries that would not support an extension of Brexit with reducing British defense support. As we approach October 30th, next in Brexit talks we will have three possible scenarios:

1) A deal is reached and hardliners back it

In this scenario, the PM convinces the Brexiteers that letting NI drift away , which proposals that he objected in the past is the best possible option to get Brexit done. Labour MPs from Leave-voting constituencies to back it and it is then set for sailing through parliament on Saturday, October 19.

GBPUSD would surge and perhaps may hit 1.32. However, markets prefer a soft deal and preferably no Brexit at all. However, the pound has been pricing in a no-deal as late as September and its recovery does not price in an accord. Our view is just a short delay. The rally we have seen may only be the beginning.

The DUP may convince Conservative hardliners to reject the deal and Labour MPs would refuse to back a “Tory Brexit” in this scenario. However, all sides may agree that elections are the way out, and the UK asks for an extension. Johnson may be convinced that a new House of Commons would provide the seal of approval. In this case, the pound may drift lower on uncertainty, but not collapse. A victory for Johnson may seal the deal, while a Labour-Liberal Democrat win may trigger a second referendum and eventually revoke Brexit. Despite uncertainty and markets’ preferred options, the downside is limited.

3) No deal – uncertainty may plunge the pound

If the UK and the EU fail to agree on a pathway to Brexit, Britain will be on course to ask for an extension, but greater uncertainty may send it lower, even if an imminent no-deal is averted.

The EU may be growing tired of endless Brexit negotiations, just like the British public. Macron and other leaders may want the UK to just get over with it and leave, even if the price is economic damage. A failure to reach an accord means fresh negotiations as the best-case scenario and that means prolonged suffering.

Other events: A US-Sino deal is also close

US-Sino trade talks have seen a similar dynamic of gloomy headlines early in the week and then seeing a deal within reach later on. At the time of writing this article, President Donald Trump and also the Chinese media have been positive. An accord may fail to include all problematic items, but provides relief for the global economy and weighs on the safe-haven US Dollar. On the other hand, the Federal Reserve’s meeting minutes have repeated similar messages on content about the US economy but worries about the global headwinds. US data have been mixed with marginally worse than expected inflation numbers but upbeat consumer sentiment. In the UK, Gross Domestic Product (GDP) dropped in August but came on top of an upward revision for July.

Brexit headlines before, during, and after the EU Summit are set to be left, right, and center for pound trading. The labor market remained robust in July with the unemployment rate standing at 3.8% and wages rising by 4% yearly (bonuses included). While the jobless rate is set to increase to 3.9% and wage growth to slow to 3.7%, these remain upbeat figures. The Bank of England has maintained its hawkish bias despite uncertainty. An increase in inflation will likely keep it from changing its mind and forecasting rate cuts. Retail sales complete the trio of top-tier figures. After a slide of 0.2% in August, the volume of sales is set to increase in the report for September. It will be interesting to see if Brexit anxiety has had any impact on shopping.

The following GBPUSD Technical Analysis chart, indicates a surge in GBP/USD, which sent it to the 200-day Moving Average, shattering the 50 and 100 SMAs on its way up. Momentum has turned positive and the Relative Strength Index remains below 70 or below overbought conditions.  The fresh high of 1.2705 is the first level of resistance. It is followed by 1.2780 which was the high point in June. Further above, 1.2960, 1.3050, and 1.3130 await cable. However, it may enter overbought conditions at some point. Looking down, support awaits at 1.2580, which was September’s high. Next, we find 1.2415 that separated ranges in September, followed by 1.2390 that played a similar role. The next level to watch is 1.2310, which capped it in August, followed by the recent low of 1.22.

For next week, from October 14 to October 18, we maintain our sell position strategy, taking the opportunity of today’s GBPUSD pair price spike, setting the sell position at 1.24380 to close the position (buy back) at 1.22, while maintaining our end of October price at 1.20. 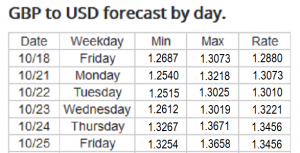 GBP to USD forecast for tomorrow, and next week.

Again, remember to place stop losses, according to your risk tolerance as unexpected news coming to the market, may significant affect trends and prices. Until next article, wealthy trading.

Disclosures: The material provided herein is for informational purposes only. It does not constitute an offer to sell or a solicitation of an offer to buy any interests in the GBP/USD or any other securities. Further, This overview may include or be based in part on projections, valuations, estimates and other financial data supplied by third parties, which has not been verified by Tony Ferreira nor KeySoft. Any information regarding projected or estimated investment returns are estimates only and should not be considered indicative of the actual results that may be realized or predictive of the performance of the GBP/USD or any underlying security.  Past investment results of any underlying managers should not be viewed as indicative of future performance of the GBP/USD.