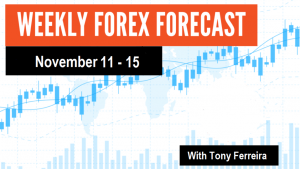 Some relief for German exporters? Beijing’s announcement of an agreement to gradually reduce tariffs between the US and China has provided hope for markets. Chinese Commerce Minister Gao Fend’s words imply a trade deal is getting closer after it had seemed to slip away beforehand. A confirmation from Washington, perhaps via a twitter thread from President Donald Trump is needed to confirm the breakthrough.

The news marks a turnaround in the mood. As mentioned earlier, media reports on Wednesday suggested that the world’s largest economies may postpone the signing ceremony of Phase One of the trade deal to December. China insisted on removing additional levies, and the US reportedly wanted to hold the event on US soil. Chinese President Xi Jinping was set to meet Trump in Santiago, but the Chilean government cancelled the APEC Summit, where the leaders were planned to attend. Before Trump sends German exports smiling, the current situation is far from being cheerful. German Industrial Production dropped by 0.6% in September, worse than expected. Today’s disappointing release has followed Tuesday’s upbeat Factory Orders publication from the old continent’s locomotive. The trade war has hurt German exports to China, pushing it closer to a recession.

The European Commission is set to publish new economic forecasts, and they may include a downgrade and not for the first time. Both events may weigh on the common currency.

Last week, we were waiting for consolidation on the EURUSD at around 1.11419, which would form a technical “cup and tea” formation (bullish signal), which did not happen. Instead, we got a Head and Shoulders formation as the following graph illustrates, favouring a short-term selling position at 1.10839. However, our technical indicators had suggested to buy the EURUSD between 1.1070 and 1.1060 and sell it at between 1.1277 and 1.1178. The buying opportunity happened on Wednesday, November 6, when the EURUSD hit the low of 1.10549.

EUR/USD has been trending lower, hitting the lowest levels since mid-October. Momentum on the four-hour chart has remained to the downside while the Relative Strength Index is still above 30, thus not indicating oversold conditions. Moreover, the currency pair is trading below the 50 and 200 Simple Moving Averages. Support awaits at 1.1065, which provided support earlier this week and capped euro/dollar earlier in October. The fresh low of 1.1055 is the next level to watch, and it is followed closely by the 200 SMA. Lower, we find 1.10 and 1.10940. The EUR/USD faces resistance at 1.1090, which capped it on Wednesday. It is followed by 1.1110, which was a swing low earlier this week. Next, we find 1.1130, another swing low, and 1.1180, a critical line, serving as a double top.

The Euro has gone back and forth during the trading session on Wednesday in early hours to dance around the 1.11 handle. This is an area that looks as if it is going to cause both support and resistance depending on which side of it the market is trading. Right now, it is likely that we will see a lot of back and forth action in this area, but one would have to think that the action over the previous couple of weeks does, in fact, suggest there is probably more downward pressure to be found here. If that is going to be the case, it is very likely that rallies will continue to be sold into, and that, of course, makes quite a bit of sense with the ECB in its loose monetary stance. The Federal Reserve is on the sidelines now, so that means that the US dollar can strengthen a bit going forward. I don’t necessarily think that we are going to meltdown, but I do believe that there is a that we will grind lower and try to target the 50 days EMA initially, and then the 1.10 level. Having said that, we prefer to keep our long position, which was triggered yesterday at 1.10549 because we see the risk-reward ratio higher on the upside rather than the downside. Despite, many currency analysts having a short-term bearish view on the EURUSD, we maintain our bullish opinion on this currency pair but changing our recommendation from a strong buy to a buy because of its limited potential on an upside swing, in the very short-term.

For next week, from November 11 to November 15, we would keep our long position at 1.1047, double the size of the EURUSD long position on any retracement to the  1.10 quote price level, and closing the long position between 1.11 and 1.10750 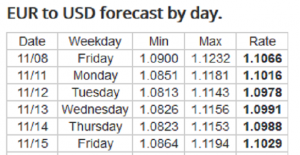 EUR to USD forecast for tomorrow, and next week.

Again, remember to place stop losses, according to your risk tolerance as unexpected news coming to the market may significantly affect trends and prices. Until the next article, wealthy trading.

Disclosures: The material provided herein is for informational purposes only. It does not constitute an offer to sell or a solicitation of an offer to buy any interests in the EUR/USD or any other securities. Further, This overview may include or be based in part on projections, valuations, estimates and other financial data supplied by third parties, which has not been verified by Tony Ferreira nor KeySoft. Any information regarding projected or estimated investment returns are estimates only and should not be considered indicative of the actual results that may be realized or predictive of the performance of the EUR/USD or any underlying security.  Past investment results of any underlying managers should not be viewed as indicative of the future performance of the EUR/USD.