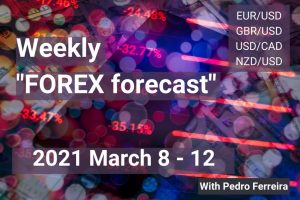 Last week, our technical indicators suggested closing all of the outstanding shorts positions and going Long at or below 1.2158, initiating new Short positions at or above 1.2207.

The main upside driver of the US dollar has been the rise in Treasury yields, with returns on ten-year Treasuries remaining too close to the 1.50% level. The world’s most powerful central banker speaks at 17:05 in his last appearance before the Fed’s “blackout period” ahead of the mid-March rate decision, and may potentially hint the Fed is ready to act to bring returns down.

So far, Powell has seen the rise in yields as reflecting upbeat growth prospects and allowing the dollar to rise. He also shrugged inflation concerns, labeling them as transitory and foreseeing higher price rises only within three years, far from market expectations. His colleagues made similar comments, apart from one. Governor Lael Brainard said that the move “caught her eye”, a subtle hint that the bank is somewhat uncomfortable with the increase in long-term borrowing costs.

What will Powell say?

There are three paths he can take, from repeating previous comments, through echoing Brainard, and finally saying the Fed is ready to intervene, similar to what European Central Bank members have been saying.

Elevated US yields come as President Joe Biden accepted a compromise on stimulus checks, potentially paving the way for approving his Covid relief package in the Senate. A vote in the upper chamber may come as soon as Thursday. Lower cutoff limits for these $1,400 payments are unlikely to be a deal-breaker for progressive Democrats in the House.

On the other hand, bonds seem to have shrugged off a duo of disappointing US figures. ADP’s private-sector employment statistics showed an increase of only 117,000 positions, worse than expected. The ISM Services Purchasing Managers’ Index fell short of estimates both on the headline and also on the employment component, critical for Friday’s Nonfarm Payrolls report.

Powell and his peers stressed that ten million Americans are out of work, and that guides their policy, not higher inflation expectations. Weekly jobless claims are due out on Thursday.

In the old continent

Germany is set to ease some restrictions on Monday but extend most measures through late in March. European countries are losing their limits on using AstraZeneca’s COVID-19 vaccines after a low take-up. The US already inoculated around 16% of its population while European countries are far from reaching double-digits.

All in all, vaccination and growth prospects point to further falls, but if Powell hints the Fed is ready to act, EURUSD could jump.

EURUSD is trading below 1.2050, falling as US yields remain elevated close to 1.50%. Fed Chair Powell’s speech is highly anticipated and may include hints about the bank’s thoughts on inflation. US jobless claims and stimulus news are also eyed.

As indicated in the above chart, Eurodollar continues suffering from downside momentum on the four-hour chart and trades below the 50, 100 and 200 Simple Moving Averages, which are converging around 1.2110 – a critical resistance line.

For next week, the question is the EURUSD is going to retest breakout again?

We have breakout in trend-line and what we expect is this that market provide huge fall after retest of this breakout. Hence, for next week, we will prefer to be on the Short side of the equation. Our technical indicators are suggesting the market to reach the following targets and indicated in the 4-hour chart: 1.2015 and 1.1960.

The Red path suggests a retest, which will completed by Blue circle once again and a falling scenario may continue and price may fall, as our suggested technical indicators targets may soon be reached.

However, the Green path is suggesting that the trend-line broke once again and retest may be on the horizon. In that case and once completed, then, we would see a strong bullish market. In that case, our Long technical indicators targets would be 1.2170 and 1.2220. 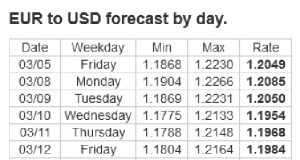