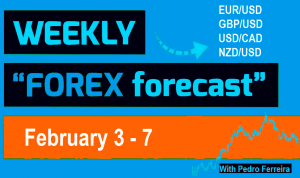 Last week recommendation was indeed a double profit trade for the long and short positions. This week, our technical indicators suggested to go long on the NZDUSD at or slightly above 0.6590 and to go short at 0.6590. An opportunity to close the long position happened this Monday when the NZDUSD hit the intraday high of 0.6619 or 0.42% ROI. On the other hand, the technical short trade suggestion to sell it at 0.6590 enable to close the position today at 0.6485 or 1.59% ROI.

The NZDUSD clings to 0.6525 with eyes on corona virus news and US GDP. The NZDUSD shows a little reaction to upbeat NZ trade data, FOMC. Fears of China’s corona virus outbreak to weigh on New Zealand exports dominate. US GDP and news headlines can entertain traders ahead of next week’s key employment data from New Zealand.

NZD/USD registers a mild loss of 0.07%, to 0.6525/20, amid Thursday’s Asian session. The pair recently ignored upbeat New Zealand (NZ) trade numbers as well as the bearish outlook of the US Federal Reserve. The reason could be traced to the likely negative impacts of corona virus on New Zealand fundamentals due to its trade proximity with China.

China recently became the major market for New Zealand dairy and meat products. In this regard, the latest report from the Australia and New Zealand Banking Group (ANZ) said, China continues to account for an increasing share of export revenue (up 21% y/y). Dairy and meat exports rose (11.5% q/q and 12.7%) on the back of higher volumes and prices.

The latest list of corona virus affected confirmed case suggest the toll rises to 7,711 from 41 on January 17 whereas there have been nearly 170 deaths, all in China, due to the same.

With this, the US, the UK France and Canada have already taken down some or most of their airlines to and from China whereas rest of the world and top-tier businesses having links to Beijing are also thinking in that direction. Additionally, the White House policymakers keep the head high in front of China and deny scaling back tariffs even if the virus epidemic hurts the dragon nation’s growth.

While portraying the risk-off, the US 10-year treasury yields dropped to the fresh low since October 09, around 1.58%, by the press time.

On the economic front, New Zealand’s December month Trade Balance (YoY) came in better than upwardly revised $-4.85B (from $-4.82B) to $-4.31B. Ahead of that, the US Federal Reserve kept its monetary policy unchanged with 1.50-1.75% target range for the benchmark rate. Even so, Chairman Jerome Powell didn’t refrain from citing downside risks to manufacturing.

Market players are now gearing up for the preliminary reading of the US fourth quarter (Q4) GDP that is expected to remain unchanged at 2.1%. More importantly, investors will wait for next Tuesday’s employment data from New Zealand to better forecast RBNZ moves as the recent data have been mostly upbeat. 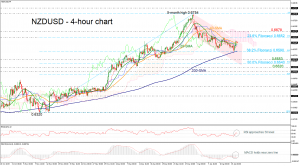 Currently, the price is trading slightly above the short-term simple moving averages (SMAs) near the return line of the channel. The RSI on the 4-hour chart is missing direction in positive area, while the MACD oscillator is moving higher, approaching the zero line. Also, the red Tenkan-sen keeps flattening below the blue Kijun-sen line, reducing chances for a meaningful recovery in the short-term. 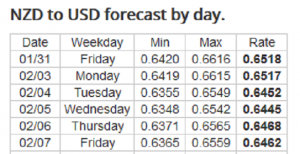 Again, remember to place stop losses, according to your risk tolerance as unexpected news coming to the market may significant affect trends and prices. Until next article, we wish all of you a wealthy trading!

Disclosures: The material provided herein is for informational purposes only. It does not constitute an offer to sell or a solicitation of an offer to buy any interests in the NZD/USD or any other securities. This overview may include or be based in part on projections, valuations, estimates and other financial data supplied by third parties, which has not been verified by Pedro Ferreira nor KeySoft. Any information regarding projected or estimated investment returns are estimates only and should not be considered indicative of the actual results that may be realized or predictive of the performance of the NZD/USD or any underlying security.  Further, Pedro Ferreira is not long or short in the currency pair. Past investment results of any underlying managers should not be viewed as indicative of future performance of the NZD/USD.