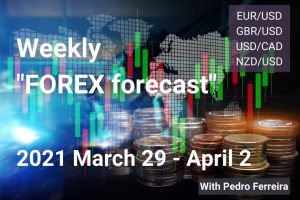 Easter is around the corner, but it is unlikely to be a happy holiday, even in Germany, where the government backtracked on special restrictions that had been planned. Concerns about rising cases in the old continent and the sluggish vaccine campaign are left, right, and center for EU leaders convening in the next few hours.

If they point fingers at AstraZeneca and the UK and take further steps such as halting shipments of vaccines, pressure on the euro would intensify. On the other hand, a more conciliatory approach, in line with the initial statement about a win-win for both sides would be positive for the common currency.

EURUSD has been under pressure also from flows into the safe-haven dollar. Concerns about Europe and also about disruption to global shipping due to a stranded ship in the Suez Canal have been weighing on sentiment.

The greenback is also benefiting from upbeat figures. US Gross Domestic Product was upgraded from 4.1% to 4.3% annualized in the final read for the fourth quarter of 2020. More importantly, jobless claims dropped to 684,000 in the week ending March, exceeding expectations as well.

Apart from the EU Summit, investors await more details about President Joe Biden’s massive infrastructure plans that will be officially presented last week. If Biden goes big, the dollar has more room to rise. All in all, pressure on EURUSD is set to continue.

EURUSD has dropped below 1.18, hitting a new four-month low. US GDP beat estimates with 4.3% and jobless claims also came out better than projected with 684,000. EU leaders convene virtually to discuss rising covid infections and Europe’s vaccine issues. Talks with the UK continue.

The Relative Strength Index on the four-hour chart is just above 30, thus outside the oversold territory. That, alongside downside momentum, is fueling the bears.

For next week, Investor sentiment towards the Eurozone has been weak, to such an extent that excellent PMI data on Wednesday failed to give the Euro a much-needed boost. On the manufacturing front, France, Germany and the Eurozone all showed strong growth, highlighted by an outstanding German read of 66.6.

Services also showed improvement, although France and the Eurozone remain in contraction territory. German Services PMI improved to 50.8, the first time the index has shown growth in seven months.

The Euro has continued to be under pressure this week over a vaccine dispute with the EU. A shortage of AstraZeneca vaccines across Europe, which has resulted in a threat by the EU to block shipments of the vaccine to the UK. Such a move would likely send tense relations between the EU and the UK to a new low.

The irony of the EU move to hoard vaccines has not been lost in British media, with The Telegraph newspaper publishing a survey, which shows that a majority of people in Germany, France, Italy and Spain consider the AstraZeneca vaccine as unsafe.

EUR has broken below critical support at 1.1840, where the 200-DMA is also situated. If EUR closes below this level, we can expect further losses, with the next support line at 1.1808. If the downturn continues, it could potentially reach as low as the 1.16 level in the coming days, as shown in the following chart. On the upside, 1.1971 has some breathing room in resistance, as EUR loses ground.

Hence, next week our technical indicators are suggesting to initiate a Long position at  or below 1.17, and to Short the currency pair at or above 1.19715. Further, we should start to see some price consolidation on the EURUSD between 1.18 and 1.16. 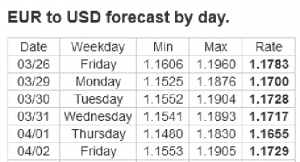