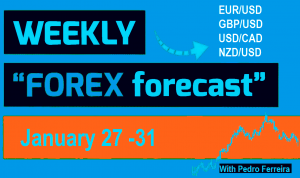 The New Zealand Dollar could be at risk to broad weakness against some of its major counterparts such as the US Dollar and Japanese Yen. Taking a look at my majors-based New Zealand Dollar index, the currency has broken under a medium-term rising trend line from October, illustrated by the red line on the chart below. The index’s value is derived by averaging NZD’s performance against its most liquid peers: USD, EUR, GBP and JPY. 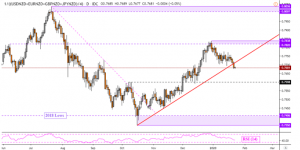 This helps paint a broader picture of the Kiwi Dollar. The currency topped in late December after leaving behind resistance, taking it out would entail the resumption of the uptrend. A confirmatory daily close to the downside could, on the other hand, pave the way to revisit levels NZD has on average not seen since early December. If the latter is the case, it would arguably shift the medium-term technical bias to the downside.

Following up on last week technical recommendation, we stated that the NZDUSD was consolidated between 0.6650-0.6600. During this week trading sessions on this currency pair, it ranged between 0.6626 and 0.6581, attesting our previous trading analysis on the NZDUSD. Despite being long short-term on the currency pair, so far, there was a little opportunity for locking in profits on both sides of equations, long or short positions.

Next week contains first RBNZ rate decision since November. The RBNZ may echo dovishness and concerns from other central banks but by how much?

The pro-risk New Zealand Dollar turned lower last week along with a downturn in sentiment which saw the Dow Jones Industrial produce a bearish reversal pattern. Pessimism in markets occurred with worrying news regarding the US-China trade war front. US President Donald Trump noted that it is unlikely he will be meeting China’s President, Xi Jinping, before a deadline which if passed could trigger an increase in tariffs (March 1).

Arguably, the largest contributor to the decline in NZD/USD was a disappointing local jobs report, however. The unemployment rate shot higher from 3.9% to 4.3% in Q4 2019 while the country added jobs at the slowest pace since Q1 2016. Looking at the chart below, RBNZ rate cut bets increased as the New Zealand Dollar weakened.

Currently, the price is trading slightly above the short-term simple moving averages (SMAs) near the return line of the channel. The RSI on the 4-hour chart is missing direction in the positive area, while the MACD oscillator is moving higher, approaching the zero line. Also, the red Tenkan-sen keeps flattening below the blue Kijun-sen line, reducing chances for a meaningful recovery in the short-term.

On the other side, an upward break of the descending channel could open the door for the 23.6% Fibo of 0.6652, which stands inside the Ichimoku cloud. More upside pressures could hit the upper surface of the cloud at 0.6678.

Again, remember to place stop losses, according to your risk tolerance as unexpected news coming to the market may significantly affect trends and prices. Until next article, we wish all of you wealthy trading!

Disclosures: The material provided herein is for informational purposes only. It does not constitute an offer to sell or a solicitation of an offer to buy any interests in the NZD/USD or any other securities. Further, This overview may include or be based in part on projections, valuations, estimates and other financial data supplied by third parties, which has not been verified by Pedro Ferreira nor KeySoft. Any information regarding projected or estimated investment returns are estimates only and should not be considered indicative of the actual results that may be realized or predictive of the performance of the EUR/USD or any underlying security.  Past investment results of any underlying managers should not be viewed as indicative of the future performance of the NZD/USD.