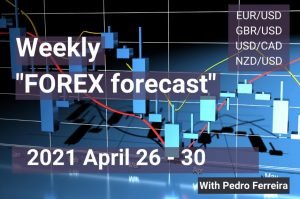 Higher low or lower high? Everything is in the eye of the beholder, and the answer differs between bulls and bears. EURUSD has pulled itself from below 1.20 as US Treasury yields have been on the back foot, dragging the dollar down.

Wednesday’s stock market recovery has also helped boost the mood and push the safe-haven greenback down. COVID-19 cases have begun falling in the US, showing the effects of reaching 40% of its population with one vaccine dose. Britain and even Europe are also on the right path.

However, there are reasons for global markets to hit the ground on Earth Day as coronavirus cases have hit new highs in India, topping 300,000 daily infections, and the situation in other parts of the world remains concerned as well. The explains why some still seek the safety of the dollar.

Amid this market mood, the European Central Bank announces its decision on Thursday. The Frankfurt-based institution is broadly expected to leave its policy unchanged, with the deposit rate at -0.50% and the Pandemic Emergency Purchase Program at €1.850 trillion.

However, Europe’s quicker immunization effort, America’s economic boom, and other reasons may prompt reporters to ask ECB President Christine Lagarde about potentially slowing down the bond-buying scheme or not deploying in full. Back in March, when darker clouds covered the European prospects, the bank announced it would bring forward some of these purchases.

The limited delivery of that promise and a better outlook make such queries all the more relevant. Moreover, the ECB’s decision comes less than 24 hours after the Bank of Canada announced it will taper bond buys. Is the BOC an outlier or just the first central bank to act?

The ECB will likely take its time with any such decision, but optimism could lift the euro.

While, the news from Frankfurt carries most of the weight, traders will also eye weekly US jobless claims. These fell to 576,000 last week, substantially better than estimated. Moreover, Thursday’s release is for the week including the 12th of the month, when Nonfarm Payrolls surveys are held, giving it an extra dose of importance.

Overall, a tilt to the upside from the ECB could boost the Euro.

EURUSD is hovering above 1.20 as tension mounts towards the ECB. The bullish BOC teases hawks in Frankfurt even as the bank is unlikely to alter the monetary policy settings. US weekly jobless claims is also eyed.

EuroDollar remains in an uptrend, as seen in the following four-hour chart, at least while it holds above 1.20, a level that separated trading ranges. The currency pair trades above the 50, 100 and 200 Simple Moving Averages and momentum remains to the upside, boosting bulls.

For next week, EURUSD is going up relentlessly. Price is up by almost 400 pips without
any significant correction over the past 3 weeks.

Currently, price has reached the upper trend line of the pattern in the above 4-hour chart.
If bearish price action happens in the red area, marked in the chart, then there’s a good chance for a drop to the 1.1900 level.


So, we would short the currency pair only if bearish candlesticks are formed at the upper TL 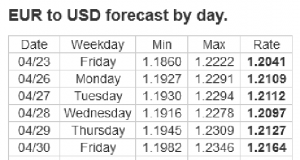