these words by Federal Reserve Chair Jerome Powell have been reverberating through markets; “You can think of this meeting as the talking-about-talking-about meeting, if you like”. The world’s most powerful central banker has referred to a discussion about tapering of its bond-buying scheme, which is now on the agenda.

Powell’s words came after the bank released its explosive “dot plot”, where it signaled two rate hikes in 2023 against none at all in the previous projections. Moreover, the Fed raised its inflation forecast to 3% in 2021 and upgraded its outlook for employment and growth for this year.

The dollar reacted in the immediate aftermath, took a break in Asia, and is now surging ahead as more investors and analysts digest the sharp hawkish shift from Washington. At the time of writing, EURUSD has hit 1.1936, the lowest since mid-April.

Markets seem to shrug off Powell’s caution, such as asking observers to take the Fed’s projections with a grain of salt and clinging to his acknowledgment that inflation could be higher and more persistent than expected. The pace of vaccinations and the rapid reopening seems to have startled Powell.

The Fed’s newfound hawkishness contrasts the European Central Bank’s commentary in recent days. Officials such as Chief Economist Phillip Lane, have reiterated the message that ending the bond-buying scheme is premature. Since last week’s ECB meeting, public remarks have been more aligned to the dovish side.

Apart from digesting the Fed, traders will eye Thursday’s release of weekly jobless claims and the Philly Fed Manufacturing Index. US President Joe Biden is back in Washington after a summit with his Russian counterpart Vladimir Putin. Markets seem less interested in geopolitics and more in bipartisan talks related to an infrastructure bill.

All in all, the Fed remains in focus even many hours after the event concluded.

EURUSD tumbles to lowest since April as the dollar resumes its gains. The EURUSD has extended its falls below 1.20, trading at the lowest since mid-April. The dollar has resumed its gains related to the hawkish Fed meeting on Wednesday, where the bank signaled tapering bond buys and raising rates will come sooner.

The Relative Strength Index (RSI) on the following four-hour chart is well below 30, deep in oversold territory. Momentum is sharply to the downside and the pair is trading well below the 50, 100 and 200 simple moving averages. 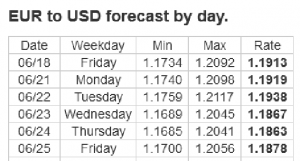