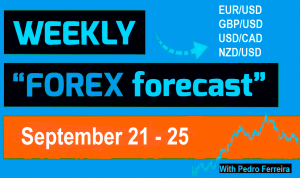 The recovery path is uncertain, but the Federal Reserve is unlikely to act anytime soon, which narrative has been weighing on markets and boosting the safe-haven dollar.

The Fed signalled to keep rates around zero through 2023, following through on its new policy to target average inflation. However, investors had already priced in lower borrowing costs for longer and wanted to hear about new stimulus in the short-term rather than only guidance about moves three years from now.

Jerome Powell, Chairman of the Federal Reserve, said that the current level of bond-buying is appropriate, seeming reluctant to inject more cash.

Growth forecasts for 2020 were upgraded to a contraction of only 3.7%, yet the bank also downgraded the 2021 projection to an increase of around 4%. As in previous appearances, the Fed stressed that the recovery depends on the course of the virus and that it is highly uncertain.

EURUSD hit the lowest in a month, but will it continue lower? The answer mostly depends on Congress as Powell also hinted. He said that “My sense is that more fiscal support is likely to be needed” – seemingly indicating that the Fed played its part, also hinting nothing new is coming.

Apart from Powell’s nudge, a new urge to provide more relief comes from disappointing retail sales figures for August. Expenditure increased by only 0.6% while the Control Group used for Gross Domestic Product calculations surprised with a drop of 0.1%.

The fall in spending seems highly correlated with the lapse of various government support programs at the end of July, most notably the $600/week federal top-up to the unemployed. Reports from Capitol Hill suggest Democrats and Republicans are coalescing around a package worth $1.5 trillion.

For investors, the larger and sooner the help from Uncle Sam, the better. The opposition party originally passed a bill worth $3.4 trillion while Republicans recently accepted less than $1 trillion.

Several economic figures are due out later in the day, most notably weekly jobless claims. Initial applications are for the week ending September 11, which is when Non-Farm Payrolls surveys are held. Economists expect another gradual decline.US building permits, housing starts, and the Philly Fed Manufacturing Index are also out.

Final euro-zone inflation statistics for August are also awaited. They are set to confirm a drop of 0.2% in the headline Consumer Price Index and a minor yearly increase of 0.4% in Core CPI. That may serve a reminder that the European Central Bank may be forced to introduce more stimulus to boost inflation.

Coronavirus cases continue rising in the old continent and have resumed their increase in America. However, investors remain optimistic about the development of vaccines. President Donald Trump said widespread immunization may be available this year, contradicting his top health officials.

Overall, stocks mostly depend on fiscal stimulus to rise and in turn push the dollar lower. Without support from elected officials, EURUSD may extend its downtrend.

EURUSD is suffering from downside momentum as illustrated on the four-hour chart and has dropped below the 50, 100, and 200 Simple Moving Averages.

The Relative Strength Index is nearing 30, thus about to enter oversold conditions implying a bounce.

The critical battle line is 1.1750, which provided support twice in recent weeks. EURUSD breached that level and hit 1.1737, yet the breakout is yet to be confirmed. Further down, 1.17 is another double-bottom to watch, and it is followed by 1.1625. 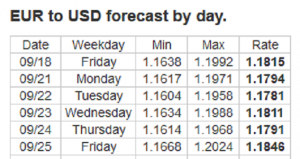 Disclosures: The material provided herein is for informational purposes only. It does not constitute an offer to sell or a solicitation of an offer to buy any interests in the EUR/USD or any other securities. This overview may include or be based in part on projections, valuations, estimates and other financial data supplied by third parties, which has not been verified by Pedro Ferreira nor Keysoft. Any information regarding projected or estimated investment returns are estimates only and should not be considered indicative of the actual results that may be realized or predictive of the performance of the EUR/USD or any underlying security.  Further, Pedro Ferreira is not long or short in the currency pair. Past investment results of any underlying managers should not be viewed as indicative of the future performance of the EUR/USD.