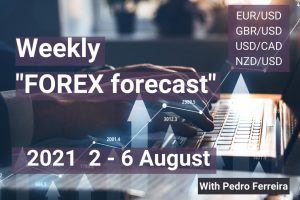 “We’re not there”, these words by Federal Reserve Chair Jerome Powell on tapering its bond-buying scheme have been weighing on the dollar, and there may be more in store. The world’s most powerful central bank has only taken a baby step toward reducing its $120 billion/month program in July, and August’s Jackson Hole meeting is not necessarily the time to pre-announce such a move.

Powell said that the economy made progress but there is still “ground to cover” He insisted that inflation is only transitory and that millions of Americans have yet to return to work. The Fed took its “first deep dive” into the timing of tapering, but decisions will have to wait.

After an initial dollar gain, the currency was sold off as prospects of additional greenbacks flowing to markets sent the dollar down.

What about the virus? The Fed expressed concern by the rapid spread of the Delta variant and counts it as a significant risk to its outlook. However, Powell stressed that with every wave, the economic impact is diminishing.

COVID-19 cases have hit a daily average of 66,000, up from roughly 15,000 in June but below the near 300,000 peak in January. Infections are still on the rise in Europe and bumped up in the UK on Thursday, but hopes from Britain show that the Delta variant can retreat fast.

Will the dollar extend its decline?

There are reasons to expect a positive mood in markets that would be unfavorable for the greenback.

A bipartisan group of senators reached an agreement on a $1 trillion infrastructure bill. While the legislation has additional hurdles to pass, additional spending by Uncle Sam is positive for the entire world. The risk-on mood may weigh on the safe-haven dollar.

In the shorter term, the focus is on America’s first release of Gross Domestic Product figures for the second quarter. Economists expect a blockbuster figure of 8.6% annualized after 6.4% in the first three months of the year. Investors will eye consumption, investment and also inventories.

Strong growth in the world’s largest economy could also provide hope for the global economy, benefiting the euro among other currencies.

In the old continent, preliminary German inflation figures are set to show an increase while employment figures are forecast to show a reduction in those out of work. The focus is on the US.

EUR/USD is trading above 1.1850, hitting the highest in two weeks. The dollar is falling across the board after the Fed refrained from pre-announcing tapering and sees inflation as transitory. German CPI beat estimates with 3.8% YoY in July. US GDP is awaited.

RURUSD is benefiting from upside momentum on the four-hour chart and has convincingly broken above the 100 Simple Moving Average. It is now tackling the 200 SMA, which is just above the daily high of 1.1863.

The Relative Strength Index is nearing 70 and another upswing could put it in overbought territory.

EURUSD after our last profit bounced exactly over the weekly support. The price has now broken the descending channel and currently is testing a minor resistance.
According to our technical analysis strategy if the market will break above, it recommends to set a nice long order. 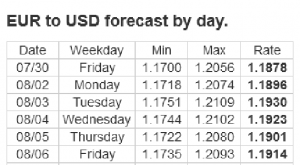