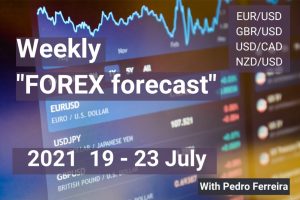 “Still a ways off” were the words by Federal Reserve Chair Jerome Powell have resulted in a lift-off for EURUSD, or more precisely, a slide of the dollar. The world’s most powerful central banker has told members of a House committee that the economy is still far from making “substantial that would warrant reducing the Fed’s current $120 billion/month bond-buying scheme”. More dollars printed mean a weaker currency, causing future inflation because as Money Supply increases faster than real output then, ceteris paribus, inflation will occur. If you print more money, the amount of goods doesn’t change. If there is more money chasing the same amount of goods, it will be inevitable that firms will just put up prices.

Moreover, Powell dismissed surprisingly strong inflation figures as transitory. The headline Consumer Price Index hit 5.4% YoY in June, yet it was driven by costs of used vehicles, car rentals, airfares, hotel stays and apparel, all related to the rapid reopening. He did expect inflation to remain elevated for a few more months, but to drop later on.

The Fed Chair’s prepared remarks came out just the US released producer price statistics for June, which smashed estimates with monthly increases of 1% on both the headline and the core figures.

Further, Powell is slated to appear before a Senate committee later in the day, and he could keep the pressure going. Investors will also eye weekly jobless claims and two manufacturing surveys released by the Fed, one for the New York region and the other for Philadelphia.

Perhaps more importantly, the focus on Capitol Hill remains of importance as discussions about a $3.5 trillion infrastructure bill agreed by a wide group of Democrats is high on the agenda.

However, the question remains. Will conservative members such as Senator Joe Manchin back the deal? If progress is made, the dollar could gain on prospects of higher inflation and thus rate hikes coming sooner rather than later.

However, if politicians bicker, the greenback could decline. Less government spending means depressed bond issuance, and a potential drop in Treasury yields could weigh on the dollar. At least in the very short-run, there is little chance for a breakthrough, potentially weighing on the greenback.

Another factor that could temporarily weigh on the greenback comes from the rapid spread of the Delta Covid variant. Cases continue rising in Europe, weighing on the euro. 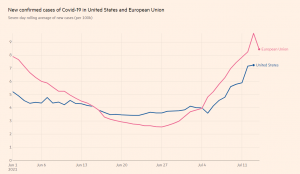 Overall, there is room for EURUSD to extend its gains.

EURUSD retreats from highs ahead of US jobless claims, Powell. EURUSD is trading below 1.1850, off the highs. The market mood has cooled after Wednesday’s enthusiasm from Fed Chair Powell’s dovish message. He speaks again on Thursday. US jobless claims and Covid headlines are also eyed.

Eurodollar has surpassed the 50 Simple Moving Average as illustrated in the above four-hour chart, while downside momentum is diminishing. However, the currency pair still trades below the 100 and 200 SMAs.

For next week, EURUSD is still making lower lows and has been bearish for a while.
As you see in the following 1h chart, the ascending trend line has been broken out to the downside and price is pulling back to it. Moreover, the important support level at 1.18 is broken and price has been closed below it.

Currently, price is in the correction phase, and our technical indicators expect a rise around 1.1820 – 1.1835, which is about 50% to 68% retrace. In the meantime, MACD shows a negative regular divergence.

If price retraced and got rejected by the mentioned levels, we can expect a fall in price again first to 1.1772 which is the yesterday’s low and then to 1.1710 which is a support level . Hence, our technical indicators are suggesting to go Short on the currency pair at or above 1.1778, setting a Stop loss at 1.19, and to go Long at or below 1.1740, setting a Stop loss at 1.1685. 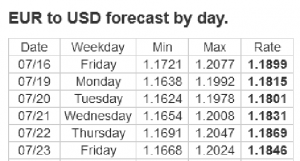