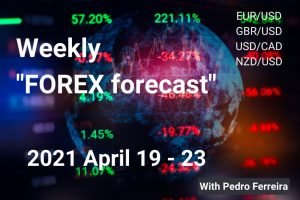 Is the taper tantrum making a comeback? Markets are far from breaking down, but when the world’s most powerful central bank merely talks about printing fewer dollars at some point in the future, the greenback immediately gains ground. EURUSD is off the highs and may continue.

Jerome Powell, Chair of the Federal Reserve, said that the bank would first taper down its bond-buying scheme before raising interest rates, something markets had already anticipated. He reiterated his assessment that the US economy is at an inflection point of more robust growth and urged caution while pledging to keep the accommodative policy in place until “substantial progress” is made. While most of his comments were not news, the mere talk of buying fewer than $120 billion worth of bonds per month at some point seems like the first warning shot.

Richard Clarida, Powell’s Vice-Chair, hinted that an indication of such a move to curb purchases of Treasuries would come at the meeting including the release of new forecasts. That implies such a hint may come as soon as June, with a reduction in buying perhaps coming around year-end.

Will the dollar continue higher? These Fed comments have come ahead of the all-important release of US Retail Sales statistics for March. After a drop in February, the economic calendar is pointing to a leap of over 5%, and some even expect to double that figure. In the middle of last month, shoppers received stimulus checks from the government, with some probably spent immediately. A surge may boost the dollar.

US March Retail Sales Preview: Can a strong rebound ramp up inflation expectations?

While the EU announced it would receive 50 million additional doses of Pfizer’s COVID-19 vaccines in the second quarter, immunization uncertainty remains substantial. The fate of Johnson & Johnson’s jabs is in the air as authorities continue assessing rare cases of blood clots linked to the inoculations.

Moreover, Denmark terminated the usage of AstraZeneca’s vaccines, and other countries may follow. The longer health concerns linger, the greater vaccine hesitancy may expand. The current supply issue may turn into a demand one.

The euro is also suffering from a power struggle within Germany’s ruling CDU/CSU bloc. The recently elected CDU leader Armin Laschet has yet to make his mark and he is challenged by Markus Söder, Bavaria’s popular premier and CSU leader. Chancellor Angela Merkel’s departure leaves a significant void in Europe’s leadership.

EURUSD has backed down from the highs near 1.20 as the dollar benefits from the Fed’s upbeat mood. All eyes are on US Retail Sales, which are set to leap.

The above four-hour chart is showing that EURUSD is in an uptrend since late March, but it faces issues at the triple-top of 1.1990. The Relative Strength Index is at around 70, flirting with overbought conditions. That hints a downside correction is coming.

For next week, and as you may see in the following chart, there is a strong resistance zone that is shown with red rectangle, suggesting a short-term correction, targeting: A. 1.1910 (retest break out and rise is expected from this area); B. 1.1840 (after correction, we expect a rebound). 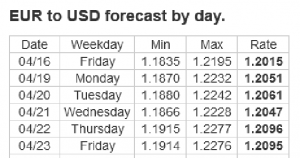