US jobless claims figures badly disappointed with a rise to 965,000 compared with fewer than 800,000 projected, yet the news failed to halt the dollar’s advance.

Elsewhere, the European Central Bank’s meeting minutes showed that the Frankfurt-based institution preferred expanding its own debt purchasing scheme in December over cutting rates. The move supported the euro back then and echoing that stance had little effect on Thursday.

The German economy has likely contracted by around 5% in 2020 according to initial estimates and Italy’s government is suffering a political crisis. These developments only add to the euro’s suffering.

Overall, there are reasons to see further falls, yet Powell has the power to change the pair’s course.

EURUSD has dropped below 1.2125, the lowest since mid-December. Media reports suggested President-elect Biden’s stimulus package will be around $2 trillion, more than expected. Ahead of his speech, Fed Chair Jerome Powell speaks. US jobless claims disappointed with 965,000.

Eurodollar has dropped below the 200 Simple Moving Average on the above four-hour chart and continues suffering from downside momentum.

The recent decline has yet to push the Relative Strength Index below 30, to oversold territory. All in all, bears are in control.

The next cushion is close,  as the round 1.21 level provided support in early December. Further down, 1.2060 was a swing low, and it is closely followed by 1.2045, a stepping stone on the way up.

For next week, as illustrated in the following 4-hour EURUSD chart, our technical analysis indicators appoint for a neutral trading. Meaning, the currency pair may either brake support at 1.2150, or resume an uptrend movement. Therefore and to be on the safe side, I would wait to buy the EURUSD between 1.20327 and 1.20214, and Short it between 1.23162 and 1.23. 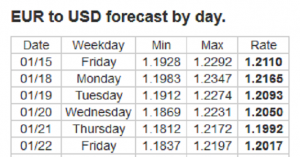