Cryptocurrency Heard for the Month: 16 November 2022 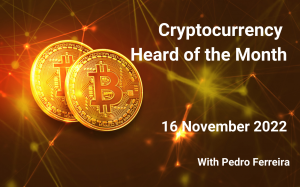 The Altcoin market experienced similar bullishness, gaining 10.57% in October, from approximately $569.1 billion to $629.2 billion at the end of the month. During the month, we saw the altcoin market capitalization trade as high as $634 billion. With the current bullish trend seen in the market, here is a look at 5 cryptocurrencies investors should watch out for the remaining days in November.

The following were our suggested entry price for:

Top Cryptocurrencies to Buy in November 2022

Flagship cryptocurrency asset, Bitcoin, has rallied back above the key $20,000 psychological level during the week, after many months of extremely low volatility, pushing off a low of $19,215, and trading as high as $20,988, just last week. This comes after the asset has consolidated in an increasingly tight range since early September. It is noteworthy that this is the first relief rally in many months.

Charles Edwards, the CEO of asset manager Capriole, explains that the Bitcoin yardstick is now at its second lowest level in history. As on-chain metrics converge to put in a classic macro bottom for BTC/USD, a new candidate is suggesting that Bitcoin is even more oversold than the average holder believes. Being oversold means that at current prices, market activity suggests that Bitcoin traders are unwilling to offload their tokens at these low prices and are seeking to sell at higher prices.

The Bitcoin Yardstick measures the ratio of Bitcoin market cap to hash rate, which are two fundamental metrics that, when compared to one another, offer key price insights. As Edwards explains, the lower the value, the “cheaper” Bitcoin is, and more hash rate is being applied to secure low-priced coins. While he cautions that it is “not investment advice,” this has implications for would-be buyers. Also to note, much of the unrealized value lies in the amount of work done to secure the Bitcoin supply during price suppression. Currently, the Bitcoin network hash rate is near all-time highs, while the price is down around 75% from its last all-time highs seen in November 2021.

“Today we are seeing the second lowest reading for the Bitcoin Yardstick in all of Bitcoin’s history. This means that on a relative basis, Bitcoin is extraordinarily cheap given the amount of energy being used on what is the most powerful computer network in the world,” Edwards explained.

One of the drivers for the hype seems to be the news circle over the last few weeks. In particular, the global trend and call for Central Bank Digital Currencies (CBDCs) have garnered Quant extremely positive headlines. Quant’s CEO, Gilbert Verdian, is extremely well-connected and has taken a seat at the European Central Bank alongside the Central Bank of Italy, the Central Bank of Lithuania, and the London Stock Exchange. The cryptocurrency community has given Verdian the title of the most connected and experienced CEO in cryptocurrency today.

However, it may be the end of the rally for the token because Quant Network’s daily active addresses (DAA) reached an all-time high of 10,949, up from around 5,850 four months ago, data from Santiment shows.

In the digital assets space, Ethereum remains the largest smart contract platform, hosting a plethora of financial products, innovation, and automation, with varying degrees of decentralization (generally referred to as DeFi).

The Ethereum Merge has been one of the most groundbreaking and talked about events in the cryptocurrency ecosystem in 2022. It was an event that saw the biggest smart contract platform, the Ethereum Blockchain, move from a Proof-of-Work (PoW) consensus mechanism, which is considered to be less environmentally friendly, to a Proof-of-Stake (PoS) which is considered to be more eco-friendly of the two major consensus mechanism.

However, new statistics have investors worried that despite the positive development of the blockchain, its native token may fall in price, with many suggesting that the price of Ether will fall below $1,000 in the short term. This worry is because network activity has dropped significantly. Ethereum has witnessed a substantial drop in its daily active address (DAA) count over the last four months.

Disinterest among investors is also visible across Ethereum-based investment funds. These funds witnessed outflows worth $2.1 million in the week ending Oct. 31, according to CoinShares’ latest weekly report. Moreover, these outflows have reached $373.30 million on a year-to-date (YTD) timeframe. In October, the funds posted an outflow of $10.80 million.

The top meme coin has posted an impressive 100% gain in the last seven days as investors flock to buy the asset with the finalization of the acquisition of Twitter by the token’s biggest supporter and the world’s richest man, Elon Musk. The rally has tipped 62% of Dogecoin (DOGE) investors into profit amid speculation that Musk’s Twitter buy will be positive for the meme token.

DOGE’s price rallied on October 26 when the billionaire entrepreneur changed his Twitter bio to “Chief of Twit.” The same day, he visited Twitter’s San Francisco-based headquarters before officially closing the deal as the new owner on October 28.

The events have also triggered DOGE’s market cap to surpass smart contract platforms’ native tokens Cardano and Solana into becoming the 8th largest cryptocurrency in the world with a $17.1 billion market capitalization. The link between Musk’s Twitter purchase and DOGE’s massive price surge should come as no surprise as many Dogecoin investors have high hopes for Musk, nicknamed “The Dogefather,” to integrate Dogecoin into Twitter in some shape or form. This is highly likely being that DOGE can be used as a means of payment at Tesla and SpaceX, which are companies owned by Musk.

Even the founder and CEO of Cardano CEO Charles Hoskinson has weighed in, stating there is now a “real possibility” of Dogecoin integrating into Twitter. He explained, “Now that Twitter is in the hands of @elonmusk I can see a real possibility that doge will somehow merge with the platform.” Hoskinson then went one step further by offering to migrate Dogecoin onto Cardano as a sidechain with embedded smart contract functionality for free.

XRP is the native token of the XRP Ledger and can be used as a currency to transact on the platform and other supported platforms.

Ripple is still dealing with the case with the United States Securities and Exchange Commission (SEC). In December 2020, the SEC charged Ripple with allegations stating that its executives sold $1.3 billion worth of XRP in an unregistered securities offering. Ripple objected to the claims, saying that XRP should not be considered a security.

The case has been on for almost two years, and with recent news, it looks to be drawing towards its conclusion, with Ripple favoured as the victor. This is because last week, the SEC and Ripple Labs filed for what is known as a “summary judgment.”

A summary judgement is a legal process where a court decides based on the facts that have been provided without ordering a trial, raising expectations of a final ruling before the year-end. Traders are bidding positive to this news because if Ripple comes out as the victor, it will eliminate a significant source of uncertainty in the XRP market. According to defense lawyer James K. Filan, he explained that the results of the summary judgment will be based on provided facts and a decision on whether XRP is a security or otherwise is expected by mid-December.
XRP is trading at $0.39.